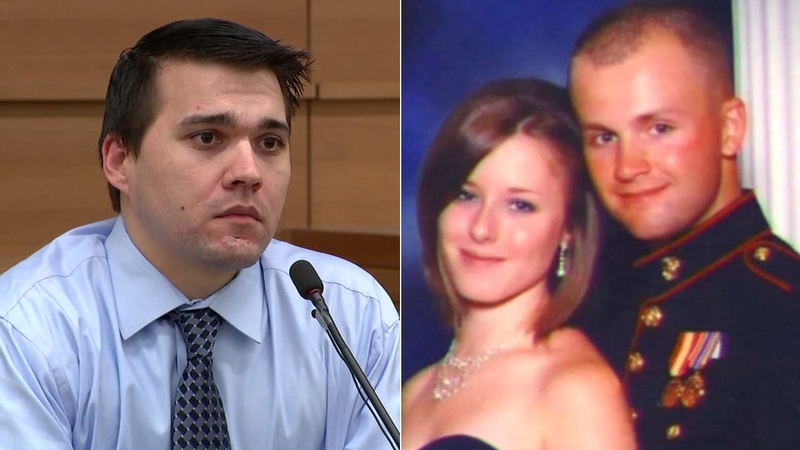 SAN BERNARDINO, Calif. (KABC) -- A former U.S. Marine was found guilty of first-degree murder after he confessed to killing his pregnant lover, who was the wife of another Marine, in June 2014.

Christopher Brandon Lee shocked a San Bernardino County courtroom earlier this week when he admitted to strangling 19-year-old Erin Corwin and pushing her head-first down an abandoned mine shaft in the middle of the desert.

Verdict: GUILTY! A former marine was convicted of murder; after dumping his girlfriend's body down a mine shaft. pic.twitter.com/jhREnAdIuV

The 27-year-old had initially pleaded not guilty to killing Corwin, whose husband was stationed with Lee at the Twentynine Palms Marine Corps base.

After the verdict, Corwin's mother said the decision brings the family closer to closure.

"I feel like justice was done for my daughter," Lore Heavilin said. "She was taken away from us in a cruel manner."

Even though he was married, Lee was having an affair with Corwin, the wife of a fellow Marine. Friends told investigators that Corwin believed she was pregnant and that Lee might be the father.

However, Lee said he didn't kill Corwin because of the pregnancy situation, but because Corwin confessed near the mine shaft to molesting his daughter - the first time that accusation has come to light.

"I made the decision to kill her," Lee testified Tuesday. "I was controlled by the anger. The hate I felt that day. It was something I never want to experience again."

Lee said he approached Corwin from behind and strangled her for at least five minutes with a garrote made up of two pieces of rebar and a cord. He said he then dragged Corwin's body to the mine shaft and pushed her in head first.

When prosecutor Sean Daugherty asked the 27-year-old Lee if he's the one who strangled Corwin, he replied, "Yes, I am."

Corwin's body was found hidden 100 feet down a mine shaft in a remote area of the high desert near Joshua Tree National Park after a nearly two-month search. She had disappeared in June 2014.

Sentencing will likely take place later this month. Lee is facing life in prison without chance of parole.