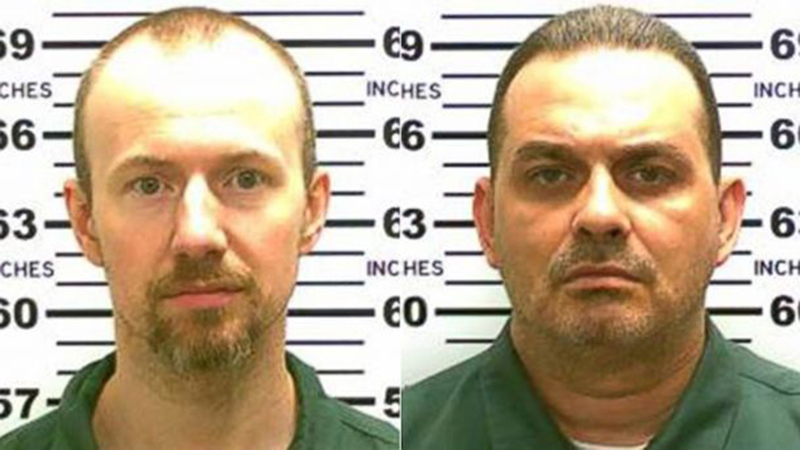 DANNEMORA, N.Y. -- Two civilians who encountered escaped murders Richard Matt and David Sweat said they are "lucky to be alive now" after seeing the convicts on the night they escaped.

The friends, whose names have been withheld for safety concerns, told ABC News they returned home around 12:30 a.m. to find a strange sight in their backyard: two men, one of them carrying a guitar case.

"The one guy that had a buzz cut, he had the guitar on his back," the female witness described. "A black guitar case. They were wearing darker jeans. The one with the case had the white T-shirt."

Alarmed, the male witness called out to them to leave the property.

"So I go look at him and I see him and I ask him, 'What the [expletive] are you doing in my yard? Get the [expletive] out of here,' and he was like, 'Sorry I didn't know where I was. I'm on the wrong street,'" the male witness recalled.

They are the only people known to have interacted with the prisoners since their escape Saturday from the maximum security Clinton Correctional Facility in Dannemora, just south of the Canadian border.

The convicted murderers are still on the loose. The sighting reported by the pair of witnesses helped police dogs start a trail, but it came up cold, ABC News reports.

The inmates' dramatic escape involved cutting through steel pipes. Authorities are questioning Joyce Mitchell, a prison supervisor who oversees inmate work assignments, as they try to sort out how the two escaped.

Matt, 48, is supposed to be serving 25 years to life after being convicted of kidnapping and beating a man to death in 1997. Sweat, 34, was given a life sentence after killing a sheriff's deputy in 2002.

New York Governor Andrew Cuomo said this is the first breakout from the high security facility since 1865, according to ABC News. He is offering a $100,000 reward for information leading to their arrest.