KABC
By Eileen Frere and ABC7.com staff
LOS ANGELES (KABC) -- Former USC gynecologist Dr. George Tyndall has been arrested and charged with sexually assaulting 16 young women while they were under his care, authorities announced.

The 71-year-old Tyndall was taken into custody at his apartment Wednesday morning, according to the Los Angeles Police Department. The arrest was made after a lengthy investigation by the agency's elite Robbery-Homicide Division, which handles high-profile cases.

Prosecutors said the alleged assaults occurred over the course of seven years while Tyndall worked at the USC campus health center. He was charged with 18 counts of sexual penetration and 11 counts of sexual battery by fraud, both of which are felonies.

The alleged victims, who range in age from 17 to 29, went to the facility for annual exams or for other treatment between 2009 and 2016, the D.A.'s office said.

Los Angeles Police Department Chief Michel Moore told Eyewitness News there may be additional charges against Tyndall in the future.

"We've presented more than 100 cases involving separate individuals that we believe were assaulted by this man," Moore said.

"And we will continue to work with the District Attorney's Office to gather the necessary evidence and proof so we can prevail at trial."

At an afternoon news conference, Moore also said detectives had traveled to 16 states to interview possible victims and spoke to more than 350 women who offered information. The department had 12 detectives from Robbery-Homicide assigned to the case.

He said detectives took him into custody Wednesday morning as he was leaving his apartment. They said he was carrying a loaded .38 caliber revolver. He complained of chest pains and was taken to a nearby hospital.

Los Angeles County District Attorney Jackie Lacey said the 29 charges that have been filed against Tyndall are cases that prosecutors believe fell within the timeline of the statute of limitations and involved sufficient evidence to back up the claims by the alleged victims.

She said her office received more than 130 crime reports regarding Tyndall. Prosecutors are continuing to review the other cases and may bring forward additional charges as warranted.

"I commend these women for coming forward," Lacey said. "I understand this experience has been emotionally devastating and the months-long investigation has been frustrating at times."

"To that end you have my word that my office will not rest until justice is served in this case."

Tyndall, who has denied the allegations, spent about three decades as a USC staff gynecologist before retiring last year after a USC investigation concluded there was evidence he sexually harassed students during physical examinations.

It is estimated that over the years he saw more than 12,000 patients.

Lawyers for Tyndall issued a statement that the doctor was looking forward to having his case tried in a court of law.

"After a year of being tried in the press, Dr. Tyndall looks forward to having his case adjudicated in a court of law where the truth will finally prevail," said attorneys Leonard Levine and Andrew Flier. "He remains adamant he will then be totally exonerated."

One of Tyndall's alleged victims reacted with relief at news of his arrest, but also wondered why it took so long after the allegations were made.

Nicole Haynes is a former track and field star at USC who alleges she was abused by Tyndall in 1996.

"We were supposed to be protected," Haynes said. "As soon as we signed to become USC Trojans, we became part of this Trojan family. To know that we haven't necessarily been protected by our family has been really tough for all of us."

It is believed the statute of limitations for criminal charges in her case has expired, but Haynes is involved in a civil lawsuit against USC.

In a statement, USC Interim President Wanda M. Austin said the school was "awaiting further details" on the arrest.

"We have cooperated with the LAPD and District Attorney's Office investigations since the beginning and will continue to do so," Austin said. "We care deeply about our community and our top priority continues to be the well-being of our students, health center patients and university community. We hope this arrest will be a healing step for former patients and our entire university."

Tyndall was booked and is at the LAPD Metropolitan Detention Center. Prosecutors recommended that bail be set at $2.075 million in the case. Tyndall faces a possible maximum sentence of 53 years in state prison if convicted as charged, the DA's office said.
Report a correction or typo
Related topics:
los angeleslos angeles countysexual misconductlawsuitsexual harassmentsexual assaultdoctorsinvestigationusc
Copyright © 2021 KABC-TV. All Rights Reserved.
RELATED 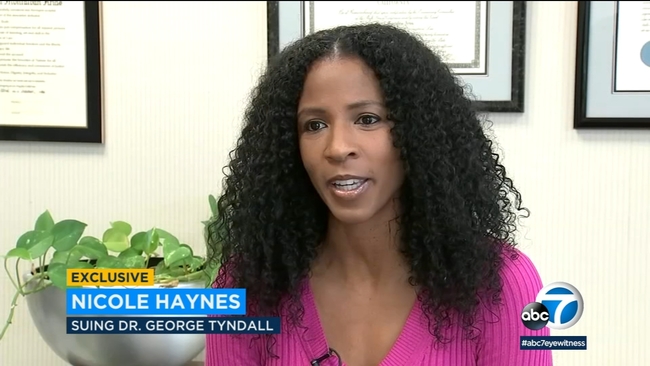