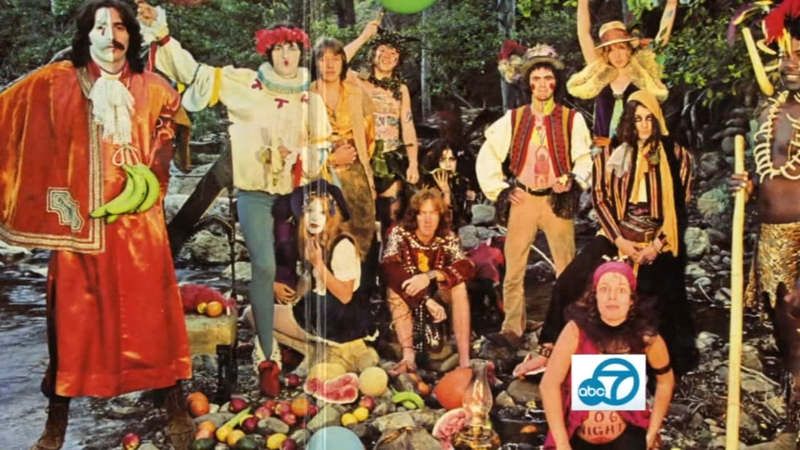 LOS ANGELES (KABC) -- Out of the tumultuous 1960s, a new consciousness formed among the youth of the time. Holding fast to the belief that peace and love could change the world, hippies sprouted throughout Laurel Canyon - a woodsy, mountainous area in Los Angeles that connects the San Fernando Valley on one side of the hill, to the Sunset Strip on the other. It was the perfect breeding ground for up-and-coming musicians as it was inexpensive to live there (about $100 would rent you a pretty great house at the top of Kirkwood) and the heart of the music world, the Sunset Strip, was only a thumb ride down the hill.

Clubs like the Whisky a Go-Go, the Roxy, the Rainbow, Pandora's Box, the Trip and nearby hot spots like the Troubadour and Bido Lito's were all venues these "unknown" bands aspired to play. Adding to the energy of the clubs was a group of artists and dancers known as L.A.'s "Freaks." Led by artist Vito Paulekas and wild man Carl Franzoni, along with a group of about 30 followers (including the very unique Tiny Tim), the Freaks are credited by many as being at the forefront of the hippy counterculture. An appearance by the Freaks at any of the clubs guaranteed a huge crowd, as gawkers came to watch the half-naked, wild dancers. Subsequently, any band the Freaks came out to see wound up with their own huge following of fans. One of the first bands that reaped the benefits of this following was The Byrds. Made up of Chris Hillman, Gene Clark, Michael Clarke, Roger McGuinn and David Crosby, their new folk-rock sound became the talk of the town. The group's first hit single was a Bob Dylan song, Mr. Tambourine Man.

Around the same time, the groundbreaking band LOVE, founded by Arthur Lee and Johnny Echols, along with early band members Bryan MacLean, Ken Forssi , Alban "Snoopy" Pfisterer and Michael Stewart-Ware, was inspiring other bands including an unknown group called The Doors. With their extended on-stage jams, poetic writing and flamboyant front man, Arthur Lee, the group was something brand new to the music scene, not to mention the fact that they were one of the first racially-mixed groups. This caused some problems in the racially tense 1960s, keeping the band from playing the Midwest and southern states, and resulting in advertising and album covers to consist of drawings of the band in place of photos to disguise their interracial makeup. Lee and Echols, who were close friends with the members of The Doors, pushed Elektra Records founder Jac Holzman to sign the new band in the hopes of getting out of their Elektra contract. Unfortunately their plan backfired and the resources that they felt should have been put into promoting LOVE suddenly went into promoting The Doors. Although LOVE never attained the worldwide musical recognition that many feel they deserved, they are revered by their legendary peers and much of their music is critically acclaimed. Their album "Forever Changes" was named on Rolling Stones' Top 500 Albums of All Time as #40, ahead of "Meet the Beatles" and Bob Marley's "Legend."

Musicians like Buffalo Springfield and Jim Morrison lived in the Laurel Canyon area as they were hitting it big in the 1960s.

In 1966, you couldn't drive the Sunset Strip at night from Crescent Heights to Doheny. The street was overflowing with an avalanche of kids hanging out at the clubs and coffee shops. Merchants complained to the city council and the police began cracking down, implementing a 10 p.m. curfew for kids under 18 and making arrests for every violation they could find. The huge crowds peacefully protested against what they called "police brutality," until one night when the popular Pandora's Box nightclub was forced to close down, and the crowd became rambunctious. The protests and unrest on the Strip inspired Stephen Stills to write what would become the anthem of a generation, the Buffalo Springfield song, "For What It's Worth."

Just behind the Canyon Country Store on Rothdell Trail is one of Laurel Canyon's most famous pads, known as the Jim Morrison Love Street house. While living there with longtime girlfriend Pamela Courson, Morrison would pen lyrics to songs for The Doors' albums "Waiting For the Sun" and most of the "Soft Parade," including the song "Love Street" about the house and the neighborhood. The lyrics... "I see you live on Love Street, there's this store where the creatures meet..." is a reference to the Canyon Country Store just outside their window. Band members John Densmore and Robby Krieger also shared a home in Laurel Canyon.

Controversy about the Love Street house includes a scene from Oliver Stone's film, "The Doors," in which Morrison locks Courson in a closet and sets it on fire. Many have claimed that this was a story fabricated by Stone, however, then neighbor Bobby Klein, who was The Doors' first professional photographer and a friend of the couple, confirms that the incident did indeed happen.

In the early days, Jimi Hendrix was known as Jimmy James, an average background guitar player for bands like the Isley Brothers. But the shy, childlike musician was destined for greatness. James lived for his guitar, practicing and experimenting with new tools like the wah-wah pedal, and within a matter of months Jimmy James would excel beyond imagination and become Jimi Hendrix, one of the greatest guitar players in history.

Bands like the Monkees and the Mamas & the Papas had roots in Laurel Canyon.

The Monkees and Mama Cass Elliot

A huge buzz in the Laurel Canyon community in the mid '60s surrounded the auditions to find four wacky musicians for a television show called "The Monkees." Originally, Stephen Stills of Buffalo Springfield auditioned for a part, but his "snaggle tooth" kept him from nabbing the role. So instead, he recommended his roommate, flower child Peter Tork. The final formation of the group was made up of Tork, Mike Nesmith, Davy Jones and Micky Dolenz. The Monkees were originally met with criticism from music "purists" because they were a fabricated band. But their comedy genius (John Lennon likened The Monkees to the Marx Brothers) combined with some of the greatest songwriters, such as Boyce & Hart, Neil Diamond (who penned their hit "I'm a Believer"), and Laurel Canyon resident songwriter Carole King (who co-wrote songs like "Pleasant Valley Sunday") would eventually earn them respect as bona fide performers. In addition, Dolenz and Tork's homes were known for some of the most famous -- and infamous -- parties in the canyon!

Known as Laurel Canyon's "Gertrude Stein," Mama Cass Elliot was one of the canyon's most beloved residents, and was known to host legendary get-togethers as well as for making connections between her musician friends that would change American music history. Before moving to Laurel Canyon, Cass was part of the folk group "The Mugwumps" along with friend and future band member, Denny Doherty. When singer John Phillips of the defunct group "The Journeymen" decided to put a new group together with his beautiful new wife, Michelle Phillips, and Doherty, Cass decided she wanted in. But the zaftig singer did not quite fit the look John Phillips wanted for his new group. The undeterred Cass would not give up, eventually John Phillips acquiesced, and the Mamas & the Papas were born!

In the fickle world of music it wasn't unusual for bands to break up and its members to regroup with other musicians. But in 1968, two very special relationships formed that would make a lot of beautiful music together!

The Crosby, Stills & Nash blend had been brewing for a while. Steven Stills put together Buffalo Springfield and David Crosby was in The Byrds, but fighting within the groups caused Stills to leave and Crosby to be kicked out, so the two decided to form their own short-lived group, the Frozen Noses. It was during this time that Crosby, on a trip to Florida, discovered a fair-haired Canadian folk singer named Joni Mitchell. So impressed by her musical brilliance, he brought her back to L.A. and over to Mama Cass' house. Joni was a triple threat - an angelic voice, a poetic writer and a uniquely accomplished guitar player. Even Eric Clapton on a visit to Laurel Canyon was in awe watching Mitchell's unique guitar playing style.

With Mitchell moving into the neighborhood and Crosby and Stills singing together as a duo, Mama Cass made a connection that would make music history... in more ways than one! Cass knew the duo needed another voice even if they didn't, and she also knew that British pop star Graham Nash was not very happy in his group The Hollies. Cass arranged a meeting between the three harmonic singers, and Crosby, Stills & Nash was born. Along the way, another Buffalo Springfield member, Neil Young, would also become part of the group... sometimes. The fighting between Stills and his former Buffalo Springfield mate caused Young to constantly walk out and leave the group. Just prior to Crosby, Stills & Nash forming, another relationship would blossom, between Nash and Mitchell. Though the relationship ultimately didn't last, many beautiful songs about their relationship were recorded, including the Crosby, Stills & Nash song, "Our House," about the couple's Laurel Canyon house on Lookout Mountain.

Frank Zappa was one of many legends of rock who lived in the Laurel Canyon area in the 1960s.

Laurel Canyon was home to countless music icons who would leave huge impressions on the world, but there was one in particular who was like no other, Frank Zappa.

Alice Cooper recalls, "when Frank Zappa first came out, everybody thought he was a clown. Everybody thought he was the court jester of rock and roll. Until you really started listening to 'Freak Out' and you started listening to 'We're Only in it for the Money' or 'Absolutely Free' and you realized that he was not just that, he was the maestro. He was actually the guy that every single musician looked up to and said this guy is an absolute genius."

Not only was Zappa an exceptional guitar player, he was a prolific composer. And although his music was ripe with silly and often low-brow humor, there was nothing juvenile about his compositions. If you were in Frank Zappa's band, The Mothers of Invention, you were one of the very best musicians in L.A., because only the best were capable of performing Zappa's intricate works. Because of the precision of his work and his values as a bandleader, Zappa also implemented a zero tolerance drug policy.

But it's Zappa's four-month residency at the infamous Tom Mix Log Cabin, along with his wife Gail and new daughter Moon Unit, that causes the most buzz when discussing the legends of Laurel Canyon. The experiences were probably best preserved in the John Mayall song "2401" (the address of the Log Cabin) on his "Blues From Laurel Canyon" album. The first line paying homage to the beloved maestro, "There's a hero living at 2401..."