ABC7 looks back on 50 years of Eyewitness News 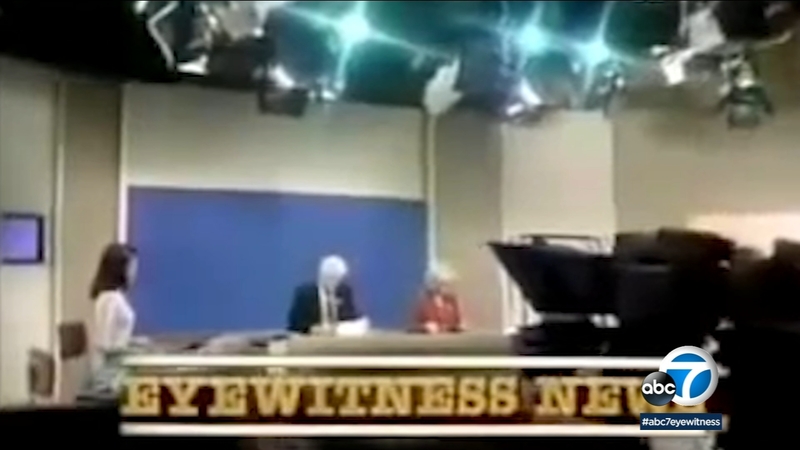 LOS ANGELES (KABC) -- Everyone at ABC7 is celebrating the 50th anniversary of Eyewitness News, which is one of the most recognized brands in America - and it's far more than just a name.

Eyewitness News is a method, a belief and a family. It's who we are and here's how it all started.

Anchors and reporters have said hello to ABC7 viewers tens of thousands of times - from that first Eyewitness News broadcast in January 1969, with Bill Bonds and Stu Nahan to our current newscasts 50 years later.

The greeting has always been our launch point as reporters and anchors take you across the Southland and around the world. But as we said, Eyewitness News isn't just a name - it's an attitude, a style.

It was all created by Al Primo, who started in a mailroom in Pittsburgh and worked his way up, way up, becoming a giant in the industry. It was while walking the streets of New York that a new philosophy hit him like a bolt of lightning.

"You see women, Hispanics, Jews, Italians and on television were these three white men. Why waste time watching people preach the news to you? You want to really hear it from people that you know and respect and were part of the community," he said.

He replaced the disconnected news reader with people who were passionate, diverse, who could bring their own perspective. He found journalists who look like the community we serve - our viewers.

As we reflect on 50 years of Eyewitness News, we can't forget the journalists and personalities who brought you the biggest stories in your community.

He also felt the news was too slow and figured out a way to spice it up.

"There was a place for everybody to feel like they were part of something important," he said. "We started the camera from the outside and rolled it through the door. Started to have motion in the openings. We added some really important music that would get the audience to wake up," he said.

Getting all those people on the set moving at once is what we call "the walk on."

"The pacing, when I left where I was and came here - it was amazing for me to have to get up and get with the program," Paul Moyer said.

"What I remember about Eyewitness News as a kid was the energy. There was something that set it apart from the other stations," he said.

Through the years, Eyewitness News evolved with slick opens and music, but the one constant that has made all the difference is the personalities.

Getting the right people up front was an art and a war.

"You could have the greatest script in the world, but if you didn't have the right person reading it - it was no good," Primo said.

Former and longtime KABC President John Severino recalled one particularly tactical moment when the legendary Jerry Dunphy was suddenly looking for a new opportunity. He told his story recently at an Eyewitness News anniversary celebration.

"We were generating our own stories - original reporting, and that's what Eyewitness News was all about," Primo said.

Legendary reporter Al Wiman was one of the originals here. He was on that first broadcast in 1969, covering the trial of Robert Kennedy's killer, Sirhan Sirhan.

As he looked over his meticulous journals from 50 years ago, he credited his profound body of work to a demanding Eyewitness News philosophy - ask the tough question and get the answer.

"We were just after the truth and the truth is very elusive," he said.

And only a few months after that first broadcast, Wiman helped crack the Charles Manson case by finding bloody clothes on a hillside. It was be an L.A. moment for the ages.

Everyone has enjoyed careers that have spanned decades - and it's all thanks to the visionary who started in a mailroom.

"I knew it the first day it went on that it was going to make it," Primo said.

As we celebrate 50 years of Eyewitness News, we take a look back at the personalities and innovations that helped create this everlasting brand.

It's also been the energy and spirit of the people in this family that have kept Eyewitness News alive.

"Well the name - Eyewitness News - it's never changed since Primo brought it in '68 or whenever it was. It hasn't changed and that's important," Moyer said.

Moyer is one of the brightest stars to ever sit on the set, and even he was fulfilling a dream.

"I grew up watching Jerry Dunphy as a kid. Actually working with him was such a pleasure for me and so much fun," Moyer said.

It was Primo's vision to create a diverse newsroom, full of people of color, women and men - all passionate journalists who are part of the community.

"You take diverse personalities that all these people had and put it together and somehow it just worked," Moyer said.

Our journalists and meteorologists have brought along their own talent, innovation and many firsts - from Fishbeck's old-school pointer and hand drawn maps to Dallas Raines' state of the art technology with our Live Megadoppler.

And we didn't stop there - we were also the first to bring a high definition helicopter in AIR7 HD. In 2005, it was demonstrated from our helicopter pad.

Another more recent first is Skymap 7, and going into the future - we are digitally the No. 1 local station in the country online and on social media.

But all that takes a backseat to what truly makes Eyewitness News successful year after year - it's chemistry and tradition.

Good journalism also means innovation. In 1974, we put our attention on one of our country's biggest killers - breast cancer.

Dr. Art Ulene partnered with Christine Lund 45 years ago. Their report on breast cancer was groundbreaking for many reasons. The promo alone grabbed your attention.

"Women were being told they should do breast self-exams, but no one was showing them how," Ulene said. "'Do not watch Channel 7's Eyewitness News next week if you would be offended by the site of a naked breast.' That changed television forever."

Yes, he said it and we did it. On live television, Eyewitness News demonstrated a breast exam without censor.

We received more than 100,000 requests for a free how to brochure and it got quite a bit of attention and ratings. But it also saved dozens, if not hundreds, of lives.

Through the years, Eyewitness News has made the world smaller - by taking viewers to Mexico and backstage with Michael Jackson.

Viewers saw O.J. Simpson's elation when he heard the words "not guilty."

The team knocked on an SLA terrorist's door, moments before all hell broke loose.

From famous weddings to funerals to white smoke to sitting down with presidents to anger pouring out in the streets of Los Angeles to standing with the people - Eyewitness News has been there.

"It was all about going beyond the news to give people information that they could use. I was proud - proud - to come here," Ulene said.

"I think it made a difference to the public. They saw a difference, they felt it, they heard it and that was the purpose of Eyewitness News," he said.

For 50 years, everyone at ABC7 has been living it along with you. It's not just big personalities, glitz and glamour. There's a legitimate journalistic philosophy with Eyewitness News and it's led to groundbreaking stories we've brought you through the years.