Man abandoned as a baby in dumpster meets biological father

KABC
SANTA ANA, Calif. (KABC) -- A man who was abandoned by his mother and rescued from a garbage dumpster by a Santa Ana police officer 25 years ago met his biological father for the first time Sunday.

"I noticed the umbilical cord and he was covered, he still had all the mucus and stuff and all the trash and gravel was sticking to him," Buelna said. "I tried to give him a tiny little bit of breath and he reacted a little bit."

Last week, Barton finally met Buelna. ABC7 covered that story and set in motion a chain of events that even Barton can't believe. His biological father, Marcos Meza, contacted police and ABC7 after watching the story on Eyewitness News.

Meza says he had an affair with Barton's 19-year-old biological mother, Serena Diaz, and only found out Barton had been abandoned in a dumpster when police questioned him. Diaz was arrested for child endangerment and attempted murder.

Meza says he has been searching for his son for years.

Barton, who was raised an only child, now has five sisters from his biological father and more family to meet. The 25-year-old also spoke to his biological mother Saturday and hopes to meet her sometime in the near future.

"I forgive her because she was a young woman in a very compromising position," Barton said.
Related topics:
family & parentingsanta anaorange countybabyadoptiongood news
Copyright © 2021 KABC-TV. All Rights Reserved.
RELATED 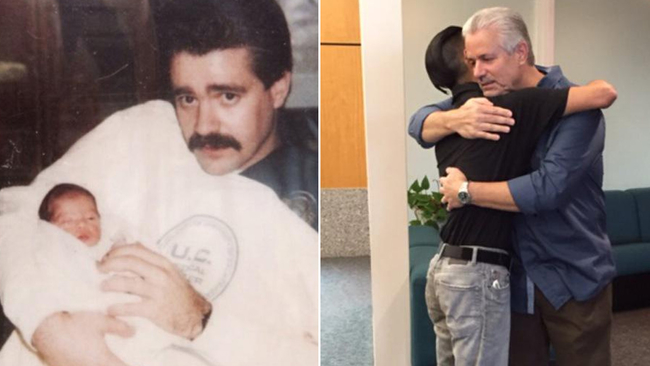