'Feel the Burn?' billboards urge young Angelenos to get tested for STDs 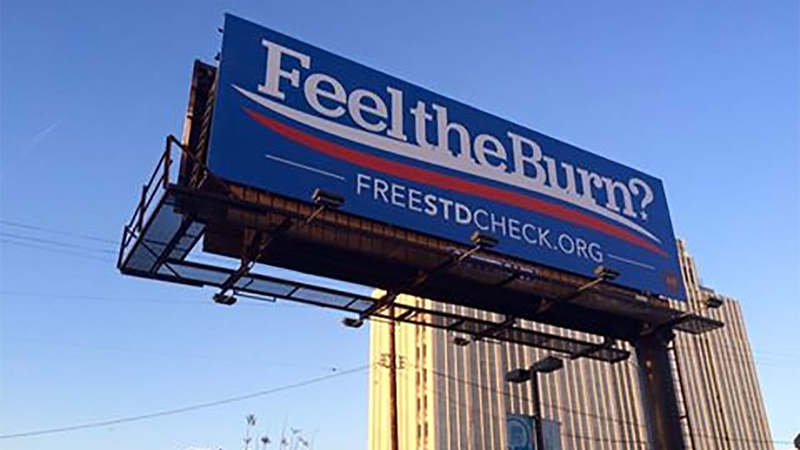 'Feel the Burn?' billboards urge young Angelenos to get tested for STDs

The billboards, which were funded by the nonprofit AIDS Healthcare Foundation, urge people to log on to freestdcheck.org to find the nearest location for STD testing and treatment.

"There are 20 million sexually transmitted infections occurring each year in the U.S., and more than half of those are young people ages 15 to 24," said Ged Kenslea, spokesman for the AIDS Healthcare Foundation.

The "Feel the Burn?" billboards were unveiled at four different locations across L.A., including the intersection of Sunset Boulevard and Van Ness Avenue and Santa Monica Boulevard and Highland Avenue.

"Senator Sanders' powerful message resonates with a lot of Americans, particularly young people," Jason Farmer of the AIDS Healthcare Foundation said in a press release. "We hope that our lighthearted-but highly important-billboard campaign for STD testing will as well."

At first glance, Rudy Duarte thought the billboard was a campaign ad for Sanders.

"I thought it was for Bernie... Who did that?" he said while laughing.

This is not the first time the AIDS Healthcare Foundation has turned heads with its controversial billboards.

Last year, it launched a campaign that featured the names of popular dating apps, including Tinder and Grindr. Tinder sent the nonprofit a cease-and-desist letter demanding that the billboards be taken down.

"These unprovoked and wholly unsubstantiated accusations are made to irreparably damage Tinder's reputation in an attempt to encourage others to take an HIV test offered by your organization," the company said.

In 2012, a billboard featuring a condom angered residents in the City of Industry.

"This is fair use. This is parody, and I'm unaware if the candidate has seen it himself but I think he would actually get a chuckle out of it, Kenslea said.

Sanders' campaign did not immediately respond to Eyewitness News' request for comment.