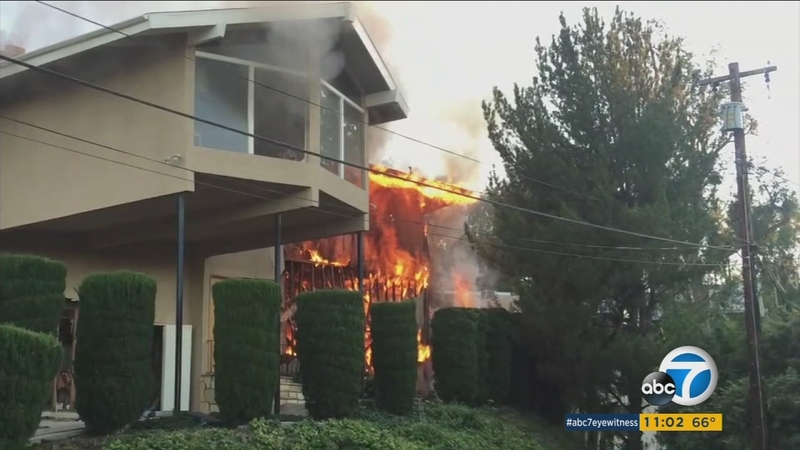 An elderly couple inside the home were saved by a gas company worker who called them out of the home moments before it erupted in flames, officials said.

"As he was pulling up, the occupants were asking him to come up the driveway," said assistant Chief Patrick Butler with the Los Angeles Fire Department. "He told them no, I'm gonna pull up my vehicle and then he called them to him personally: Please come to me. As soon as they arrived at his location, the house blew up."

That SoCal Gas employee, who has worked for the company for seven years, said he was just following company protocol.

This @TheGasCompany worker being hailed a hero after he saves an elderly couple just monents before their home explodes in flames. pic.twitter.com/uzyzKeH5so

The explosion was apparently the result of a contractor doing sewer work at the home.

SoCal Gas said it was notified at 7:30 p.m. of damage to a natural gas line at the home. Shortly after the call, the explosion was reported.

The company said it appears an independent contractor doing sewer-line work hit and damaged a natural-gas line, causing the explosion.

Fire officials said the two-story home in the 4900 block of Marmol Drive was involved in heavy flames and the building was structurally compromised.

"I heard the boom and I felt the vibration," said Francesca Rodriguez. "It was one big one. It shook the house."

It took 59 firefighters 110 minutes to knock the fire down because the flames continued to be fueled by the gas line.