With most firework shows canceled, SoCal residents set off their own 4th of July celebrations 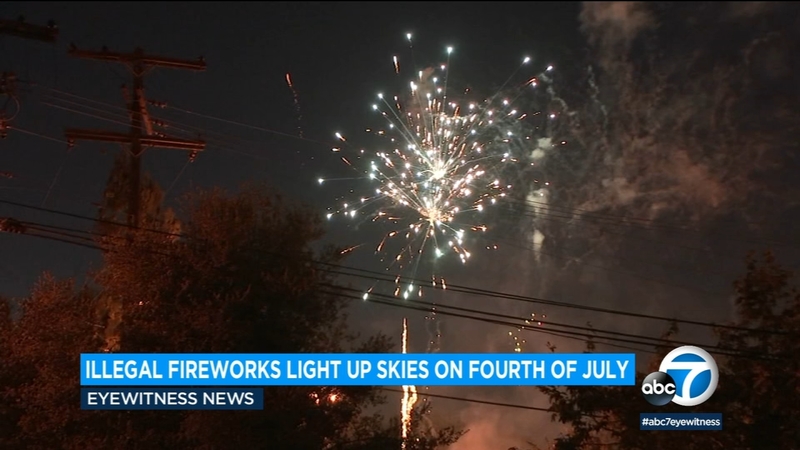 The sky across Southern California was illuminated with fireworks as the region celebrated the Fourth of July, with loud bangs ringing through the night and some pyrotechnics being blamed for several small fires.

Although fireworks are illegal in the city of Los Angeles and all firework displays are banned in L.A. County this year, that didn't stop residents from putting on a show for their neighborhoods.

Video captured from ABC7's stationary cameras throughout the region, including one at LAX, showed how widespread they were being set off.

The Southern California sky was illuminated with fireworks as the region celebrated the Fourth of July.

Many people said they enjoyed the fireworks displays, even though it put the public in danger.

"It sounds like they're teaming up to make sure everybody here, everybody over there, everybody in this vicinity is getting the right amount of fireworks -- no matter where they are," Sheikh Ahamed said.

The Los Angeles Fire Department said it responded to over 100 fires, including 29 structure fires, 12 brush fires and 116 rubbish fires. It's unclear if fireworks were responsible for all them but the department tweeted "Fireworks are not toys."

A brush fire erupted next to an apartment complex in Mission Hills. Meanwhile, in Covina, several trees caught fire. Investigators were trying to determine if fireworks were to blame in both incidences.

East Los Angeles was trending on Twitter as many likened the multitude of amateur firework displays to a show at Disneyland.

Marc Cesar captured an overview of what the illuminated night looked like across the city.

With most professional firework shows canceled this year, many took it upon themselves to put on their own show, including in East Los Angeles where a barrage of fireworks lit up the night sky.

The Los Angeles Police Department Communications Division asked people not to call 911 to report illegal fireworks unless someone is hurt or there was a fire.