For the past few weeks, the owner says her Riverside County neighborhood has been shaken by the explosion of illegal fireworks.
KABC
By Leticia Juarez 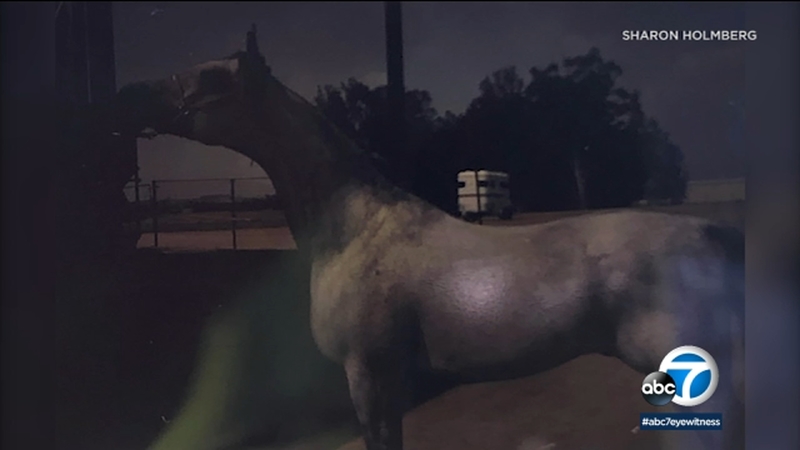 RIVERSIDE COUNTY, Calif. (KABC) -- Sharon Holmberg is mourning the loss of her 33-year-old Arabian horse Gamara after her beloved pet bolted into corral fencing following a night of fireworks.

"The fireworks scared her to death and she ran, ran right through the fence. She hurt her foot and could not use it for a couple of days," said Holmberg.

For the past few weeks, Holmberg says her Riverside County neighborhood has been shaken by the explosion of illegal fireworks. Last Friday, the loud noises became too much for Gamara. Holmberg said her horse never ran any more due to complete blindness, but the fireworks caused her to run.

"She cut her face and forehead and nose all up horribly and we thought that was all that had happened to her," she said.

But there were other unseen internal injuries, and on Tuesday, Gamara had to be put down to end her suffering. Holmberg recalls that final walk up her hill with the horse she raised from the time it was six-months-old.

"We got her slowly through the corral. She got to the gate of the corral where we use to go out for rides, she thought she was going for a ride, and she just pranced even with that sore leg she pranced right up the hill," said Holmberg.

Afterwards, Holmberg placed a note on her community mailbox letting her neighbors know what a night of fireworks had cost her.

"The note said something to the effect of thank you for killing my horse, hope you enjoyed the fireworks. That night there were no fireworks," she said.

The Riverside County Department of Animal Services has also noticed with concern an uptick in the number of fireworks heading into the 4th of July holiday.

"In the past usually we would hear the illegal fireworks usage July 2nd, July 3rd. We are hearing it so many days before the 4th of July we have a legitimate concern what is it going to be on the 4th of July?" said John Welsh, spokesman with the Riverside County Department of Animal Services.

Fireworks are illegal in Riverside County and violators could face a $1,000 fine.

Neighbors say a big cat had been prowling the neighborhood for days -- a male mountain lion, who ended up getting himself cornered under a house by Monrovia Police.