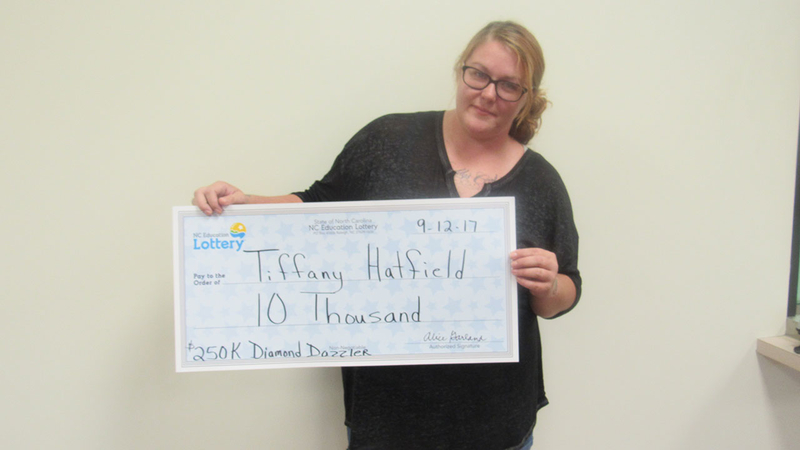 ROCKY MOUNT, N.C. (KABC) -- A Florida mother of three evacuating because of Hurricane Irma won $10,000 after buying a scratch-off ticket in North Carolina.

Tiffany Hatfield, 28, left her home in Ocoee, near Orlando, Friday night with her three young daughters to drive to a friend's home in Virginia.

Hatfield had moved to Florida from Connecticut in June to live closer to family while her husband, a member of the U.S. Navy, is stationed in Hawaii. Hatfield did not plan to evacuate until her husband, who is deployed, suggested she leave with their kids.

"He pulled into port and called and all he said was, 'I saw the hurricane and you guys need to leave,'" recalled Hatfield, who left with her daughters around 10 p.m. Friday.

Hatfield drove through the night in traffic heavy with other evacuees. Early Saturday morning, Hatfield stopped at a "middle of nowhere" convenience store in Rocky Mount, North Carolina.

While she and her daughters stretched, she purchased two $5 Diamond Dazzler scratch-off tickets at the Circle K on Sunset Avenue. One of the two tickets proved to be a $10,000 winner.

With the state's lottery offices closed for the weekend, Hatfield drove to her destination in Virginia with her winning ticket close in hand.

MORE: Officer picks up American flag from highway after Irma

Hatfield and her daughters made a detour to a lottery office in Greenville, North Carolina, Tuesday on their way home to Florida.

Hatfield accepted a check for $6,951, the amount she received after federal and state taxes, a North Carolina Education Lottery spokeswoman told ABC News.

Hatfield's home in Florida lost power but sustained only minor damage, including a downed tree and flooding in her yard.

She said she plans to use the lottery money to redecorate her family's home.