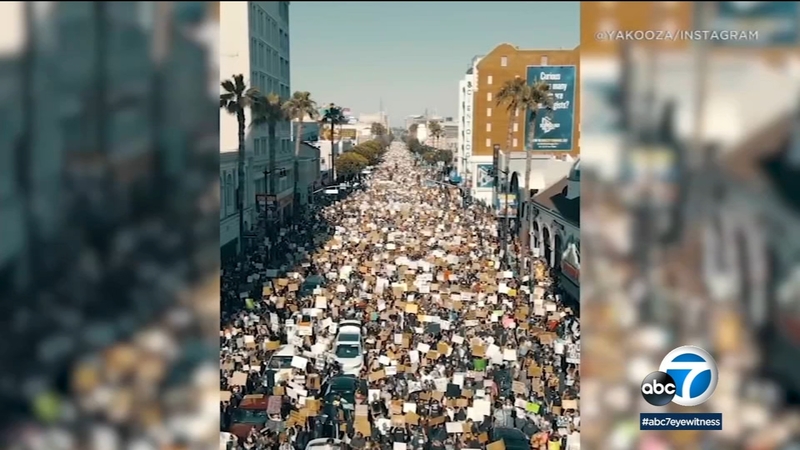 LOS ANGELES (CNS) -- Los Angeles' top law enforcement officials said that they are ready to call on the National Guard for help as they brace for protests over the upcoming verdict in the murder trial of a former Minnesota police officer charged in the death of George Floyd and another recent police killing in that state.

"We are inquiring with all our law enforcement partners as to their state of readiness, which includes contingency planning with the National Guard,'' Capt. John Satterfield, a spokesman for the Los Angeles County Sheriff's Department, told the Los Angeles Times.

"Sheriff Alex Villanueva is a strong supporter of the First Amendment and the people's right to protest, but if these actions become violent or shift into lawlessness, swift and decisive action will be taken to protect life, protect property, and maintain order in a fair, firm and impartial manner,'' Satterfield said.

Saying authorities are in the planning phase,'' Satterfield said it would be premature to say how many Guard troops would be ready to deploy.

On Monday, law enforcement officials and community leaders gathered in downtown Los Angeles to urge calm amid rising tensions in Minnesota amid the trial of former police officer Derek Chauvin and the weekend fatal police shooting of a Black man during a traffic stop in that city.

Los Angeles Police Chief Michel Moore, along with Villanueva and about two dozen religious and community leaders, gathered to plead for calm locally and urge anyone who opts to protest to do so peacefully.

"All of us will do all within our power to support and facilitate these expressions within our community,'' Moore said. As one community, our Los Angeles community, we must also strive to not allow legitimate anger and frustration to spiral into violence, or allow others to hijack community emotions for their own destructive purposes.''

The call for calm comes as testimony continues in the trial of Chauvin, who is accused of murder for kneeling on Floyd's neck for nearly nine minutes while arresting him for allegedly passing a counterfeit $20 bill last Memorial Day. Floyd's death sparked nationwide protests, including in the Southland.

"The primary mechanism of death is asphyxia, or low oxygen," one expert said during Derek Chauvin's trial.

At Monday's news conference, Moore said that he too was prepared to call on the National Guard "if that becomes necessary.''

The pleas for calm came after a police officer fatally shot 20-year-old Daunte Wright during a traffic stop on Sunday in Brooklyn Center, a Minneapolis suburb. Brooklyn Center Police Chief Tim Gannon -- who resigned on Tuesday -- said Monday that the officer intended to use a Taser, not a firearm, and that he believed the shooting of the Black man was an "accidental discharge.''

The death reignited tensions in the Minneapolis area, where protesters once again took to the streets to demand racial justice as they did following the death of Floyd.

Authorities around Minneapolis and elsewhere were already on alert as Chauvin's trial on manslaughter and murder charges nears an end following nearly two weeks of testimony.

Officer Kim Potter claimed she mistook a Taser for a gun when Daunte Wright was shot to death. She and her police chief resigned Tuesday.