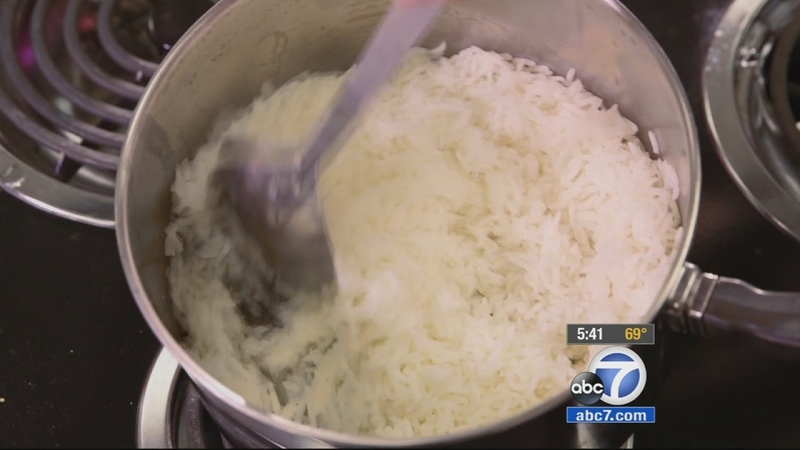 LOS ANGELES (KABC) -- Consumer Reports issued new guidelines Tuesday for limits on how much rice you and your children should eat. Rice and many products containing rice have significant levels of inorganic arsenic, which is linked to cancer.

The Food and Drug Administration recommends parents consider other options rather than rice cereal for their children's first solid food.

Rice comes in lots of varieties, and it's a common ingredient in many packaged foods. Consumer Reports analyzed Food and Drug Administration data on more than 600 foods that contain rice and found some with worrisome levels of inorganic arsenic.

"We found that hot rice cereal and rice pasta can have much more arsenic than we saw in our previous tests," said Dr. Michael Crupain, Consumer Reports. "So we now recommend that children rarely eat these foods, which means not more than twice per month."

"Levels of arsenic vary," said Crupain. "We based our recommendations on the higher levels in each food group to offer consumers the best protection."

As for rice itself, Consumer Reports laboratory tests in 2012 found high levels of inorganic arsenic in white rice and even higher levels in brown rice.

"Arsenic in our food is a real public health problem and we think it's important to eat less of it," said Crupain.

Consumer Reports has tested other types of rice and other grains and has found several alternatives with much lower levels of inorganic arsenic. Some good choices: sushi rice from the U.S., and white basmati rice from California, India and Pakistan.

"On average they had half the amount of arsenic as most other types of rice," said Crupain.

Other good options are bulgur, barley and faro, and gluten-free grains like amaranth, buckwheat, millet and quinoa.

In a statement, the USA Rice Federation says: "Studies show that including white or brown rice in the diet provides measurable health benefits that outweigh the potential risks associated with exposure to trace levels of arsenic."

The Food and Drug Administration says: "An ongoing assessment of arsenic in rice remains a priority for the agency."

The FDA plans to release a draft assessment of potential health risks.

If you eat brown rice, Consumer Reports found brown basmati rice from California, India and Pakistan has about one-third less inorganic arsenic than other brown rice.