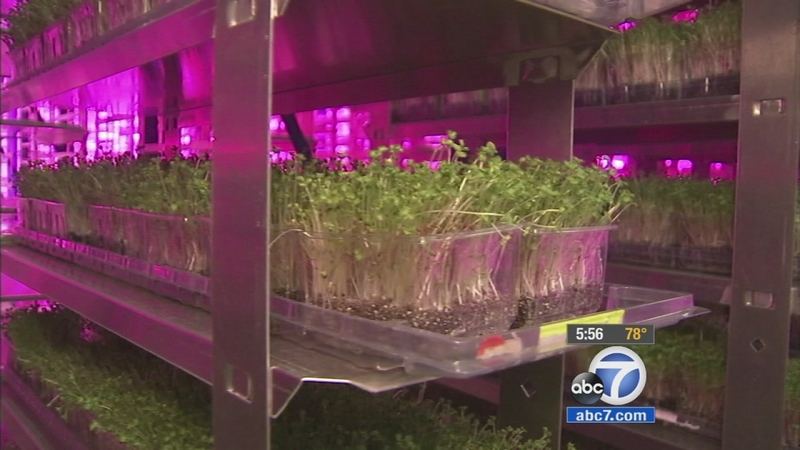 IRVINE, Calif. (KABC) -- It's not your conventional looking farm. A hydroponic growing system at Urban Produce has trays of organic produce stacked vertically, which rise high up in a building in Irvine.

There are seven different leafy vegetables, from bok choy to wheat grass, totaling about 16 acres worth of produce. The hydroponic garden uses 90-percent less water, according to Urban Produce CEO Ed Horton.

Where the water comes from is even more uncommon.

"It's actually taking the air and converting that into water," Horton said, pointing to a large commercial unit. "This is actually a dehumidifier, so it actually pulls the humidity out of the air so we water the plants, the plants create humidity, we pull that back out of the air."

The technology, called the Skywell system, uses filters to purify the collected moisture to produce about 120 gallons of water a day. Between storage and use, it's also exposed to ultraviolet light and the ozone.

"As long as there's air in the building we're producing water," Horton added.

Urban Produce sells to 25 Orange County restaurants and grocery stores, such as Albertsons, Pavilions and Vons, and produces about 45,000 cases a month at full capacity since it started using the technology three months ago.

"The product itself is beautiful," said Dave Samuels with Ingardia Bros. Produce, one of the companies that recently started buying from Urban Produce. "Being in this drought situation, it's great what they're doing with the technology."

But Urban Produce, which received its USDA Organic Certification last January, can't say how much the Skywell technology costs because it's a prototype.

The company says it's working with Skywell, and so far has not found any problems.

As for drawbacks, Horton says the growing system works well because it's indoors, but would not likely work for a traditional farmer, who would have to use hundreds and hundreds of gallons to water the fields.