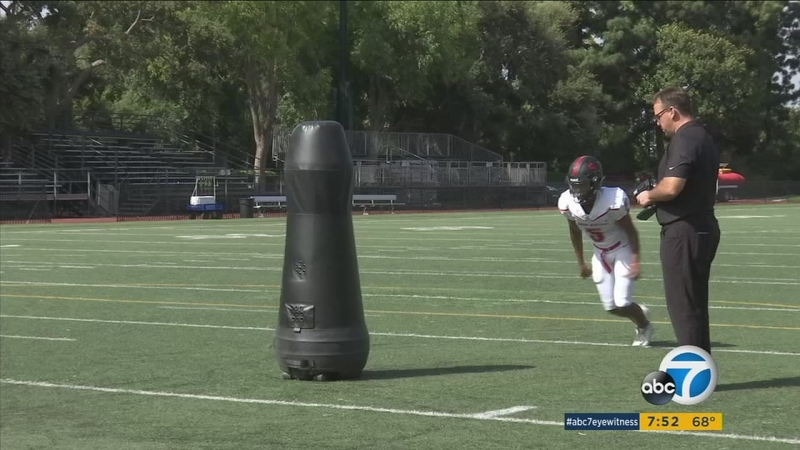 HOLMBY HILLS, LOS ANGELES (KABC) -- Tackles at Harvard-Westlake School are now made at the intersection of football and technology with the use of remote-controlled tackling dummies.

Terrence Barnum, head of athletics at the school, said the department felt it was worth the $8,000 investment in order to increase their skill level while staying safe.

Offensive tackle Liam Douglass said the device helps to "hone the angles down and really hone the tackling techniques."

While practicing with the remote-controlled dummies, players feel a higher intensity during practices.

"I feel like the bag really helps me," defensive back Thomas Glover said. "It's just more fun, it does different stuff than just tackling a regular standing bag."

The defensive players approved of the investment while practicing with the dummies for the first time.

The dummies moves up to 19 miles per hour on a standard football field and weighs 195 pounds.

Kevin McLeod of Rogers Athletic Company said the robotic dummy will "hit you if you are not lined up and ready for it."

The football and strength training equipment company started shipping out remote-controlled tackling dummies in March to high schools, colleges and professional teams including the L.A. Rams.

The idea was inspired by Buddy Teevens, who is the head football coach at Dartmouth College. Since the incorporation of the dummies, Dartmouth has seen an 80 percent reduction in practice injuries.