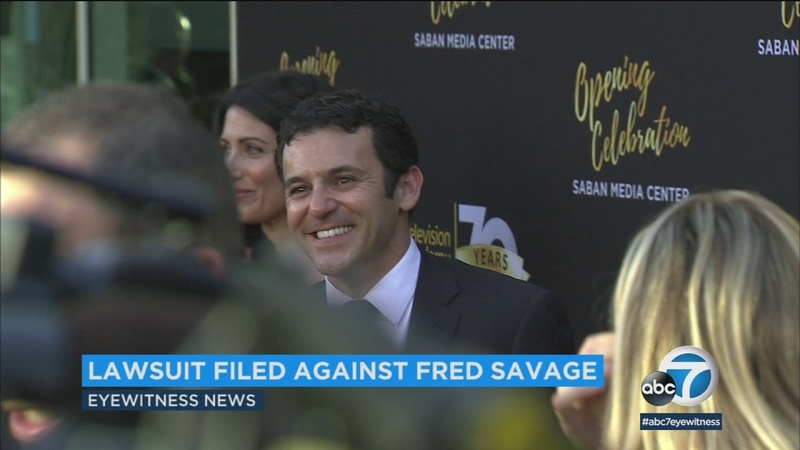 Set costumer YoungJoo Hwang was employed with 20th Century Fox in 2015 for the show "The Grinder," in which Savage starred.

Savage accused of aggressive behavior, intimidation and constant use of profanity, assault and battery by a costumer on the Grinder, per the lawsuit. @abc7 pic.twitter.com/tcFOwR8rMg

Hwang said she was in charge of setting up and maintaining the actor's outfits during the show. She explained that he was aggressive toward her on many occasions.

"He would routine curse at me, yell at me, demean me, when all I was trying to do was my job," Hwang said.

She said the alleged abuse from Savage made it stressful for her to go to work and added that she's "not the only woman that Savage targeted."

"There were others, and this was well known on set," Hwang said.

She detailed one specific encounter in which she attempted to brush off dandruff from the actor's jacket.

"Mr. Savage snapped. He yelled at me, told me not to touch him, and he hit my arm violently three times," Hwang said.

She added that she cried from the humiliation and pain. She said that moment was the "last straw because my physical safety was at risk."

Hwang said she reported the incident to her superiors but rather than taking action, she said, they encouraged her not to report Savage's conduct because people would lose their jobs and she would never work in the industry again.

"My complaints were ignored, the violence perpetrated against me was ignored, and I was made to feel as if I had done something wrong - that I was to blame and that I should just keep my mouth shut," Hwang said.

The costumer was moved to another show and Savage continued to work on "The Grinder."

"It took everything I had in me to be here to today and to speak out," Hwang said. "I was inspired by the #MeToo movement and the women before me and encourage other women to come forward and speak their truth."

Sedaghatfar claimed the company has done nothing to "remedy or prevent Mr. Savage's harassment, his bullying, his intimidation and his battery."

The company released a statement, saying they found no evidence of wrongdoing by Savage.

"Fox takes all allegations of improper conduct very seriously. We conducted a thorough investigation into these allegations and found no evidence of any wrongdoing on the part of Mr. Savage. We will vigorously defend against these unfounded claims."

Savage said in a lengthy statement that the accusations by Hwang are "completely without merit and absolutely untrue."

"I have witnessed tremendous courage over these past few months, watching brave women who have come forward publicly fighting through the shame and stigma of harassment. I've seen first-hand the growing support in this movement that has always felt so lacking. As someone who has always tried to live honorably and with integrity, it never dawned on me that my name could be on the other side.

I was made aware that a woman working in the costume department of a show I was on almost three years ago has claimed that I treated her harshly on set simply because she was a woman. These accusations are completely without merit and absolutely untrue. Fox conducted an extensive internal investigation into her claims, a process in which I fully participated. After concluding a thorough investigation, Fox determined that there was absolutely no evidence to support these accusations. None of her claims could be substantiated because they did not happen.

I have been working in the entertainment industry my whole life and have always endeavored to treat everyone on any set I work on respectfully and professionally. While none of the accusations being leveled at me are true, I wholeheartedly support all people who feel they are being mistreated come forward and speak to human resources and those in charge. We have witnessed so much bravery from those speaking out recently, but I will just as boldly protect myself and my family from those seeking to tarnish my good name. I cannot let these people in particular denigrate me while harming the message of thousands of women and others who have suffered and continue to suffer."