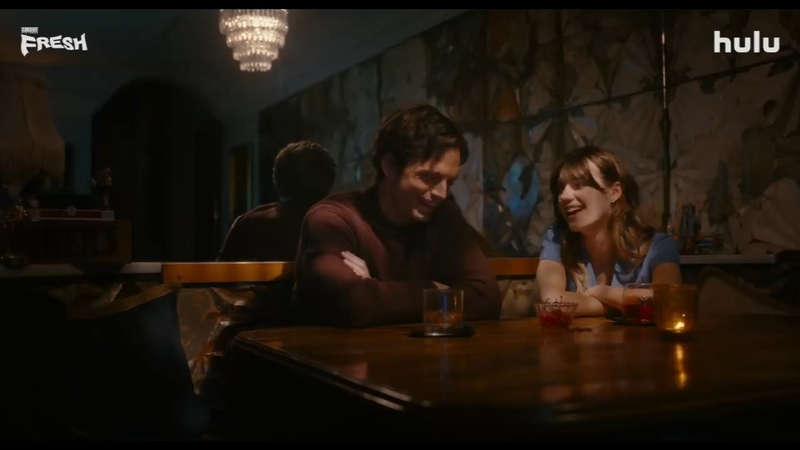 What looks like a romantic comedy starring Daisy Edgar-Jones and Sebastian Stan turns out to be a very intense drama in a new film called "Fresh" now streaming on Hulu.

What begins as flirty banter between the two leads takes some strange turns.

It starts as a familiar sort of rom-com, until the humor turns so black, it gives new meaning to the words "dark comedy."

The perils of modern dating are obvious even before characters encounter each other in a supermarket.

He suggests she try some grapes, and after some pickup lines they both agree are lame, he departs saying, "I don't want you leaving here thinking I'm a weirdo."

But he is a weirdo.

After they have sex, he drugs and kidnaps her -- but that's not the end of his evil.

There's a twist so surprising even the performers were astonished the first time they read the script.

"Yeah, I didn't really know what was coming when I was reading the script," Edgar-Jones said. "I was just kind of completely shocked every time I turned the page. It really does take you on quite the journey."

It turns out her erstwhile partner has what one reviewer called, "unusual appetites;" but I'm going go be more blunt about it and tell you: he's a cannibal.

But the two stars have so much chemistry together they make "Fresh" seem palatable, even fun at times.

"There were these moments of humor juxtaposed with, obviously, the horror element that I felt it just was complex," Stan said.

Stan is a mainstay of Marvel movies, while Edgar-Jones was one of the "Normal People" in the limited series I called one of the best I'd ever seen.

"She's one of the most authentic actors I've ever been opposite," Stan said. "It's impossible, I feel like, to get anything fake from her, so then it makes it impossible for me not to have a real true reaction as a result."

The two are entrancing to watch, even in a movie that will not be to everyone's, uh...taste.