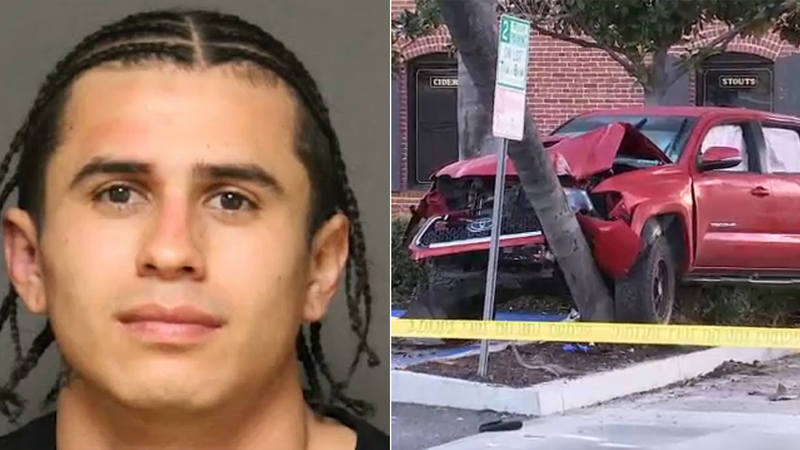 FULLERTON, Calif. (KABC) -- A total of 10 victims were hospitalized after a suspected DUI driver plowed into a crowd near restaurants and bars in downtown Fullerton early Sunday.

Fullerton police responded to the area of 100 W. Santa Fe Avenue regarding reports of several pedestrians who had been struck by a red Toyota Tacoma at about 1:45 a.m.

Upon arrival, officers found that a Tacoma had driven up onto the sidewalk and struck nine pedestrians before hitting a tree. Multiple victims were trapped underneath the truck, which was smoking and had serious front-end damage with its airbags deployed, police said.

With the help of some good Samaritans, officers were able to lift the Tacoma enough to free the pedestrians who had been stuck underneath it.

"Everyone was just trying to push the truck away so that the girls can come out," witness Sohrab Gill said. "I saw one of the girls screaming, 'Help, help!' and they were just, like, trying to pull off the truck."

Officers immediately began life-saving measures for those who had been struck. Fullerton firefighters responded and ultimately 10 victims were transported to local trauma centers with injuries ranging from moderate to life-threatening and ranging in age from 18 to 49.

The driver of the Tacoma, later identified as 22-year-old Christopher Solis of Anaheim, is suspected to have been driving under the influence of drugs at the time of the crash. He was placed under arrest for felony DUI causing great bodily injury.

Police said hundreds of people were on the sidewalk at the time, in front of nearby restaurants and bars, as it was bar closing time for approximately 60 locations.

Witnesses said the ordeal started as an altercation. A group surrounded the truck and demanded that the driver get out.

"I saw like four or five guys hitting his pickup truck with their hands and putting dents on it," explained Gill. "The pickup truck driver was trying to get away and by doing that, he accidentally hit a car in front of it. He just got panicked and then tried to run away."

It was then that the car took off on Santa Fe Avenue, crashed into several cars and mowed down the pedestrians.

"It's sad. This is supposed to be a place where people are able to come and enjoy themselves and, unfortunately, someone's reckless behavior and their lack of caring about others has caused a lot of heartache and a lot of sadness for families today," Fullerton PD Lt. Jon Radus said.

Anyone with information about the incident, and anyone who may have captured the incident on cellphone video, is encouraged to contact the Fullerton Police Traffic Bureau at (714) 738-5313.
Report a correction or typo
Related topics:
fullertonorange countyduipedestrian injureddui crashpedestrians
Copyright © 2021 KABC-TV. All Rights Reserved.
More Videos
From CNN Newsource affiliates
TOP STORIES