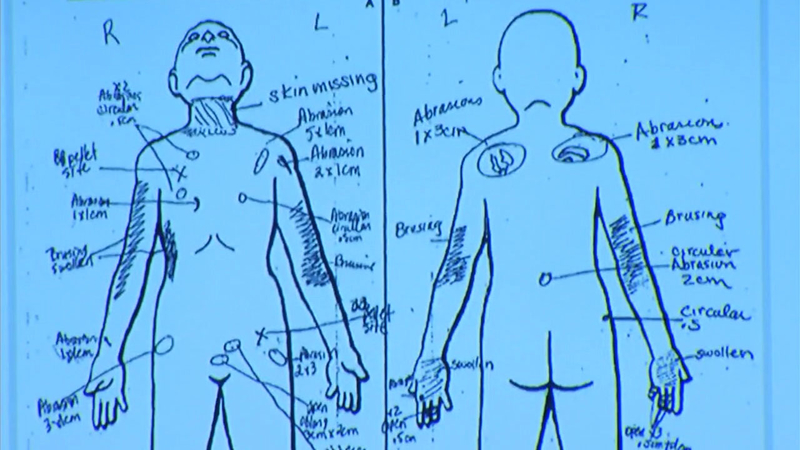 LOS ANGELES (KABC) -- A nurse who witnessed the severe injuries on the body of 8-year-old Gabriel Fernandez in 2013 testified in court Friday.

Registered Nurse Alison Segal said she was at the Antelope Valley Hospital when Gabriel was brought there after being found unresponsive at a Palmdale apartment on May 22, 2013.

Her testimony offered more details on the severity of Gabriel's injuries. Gabriel's mother, Pearl Fernandez, and her boyfriend, Isauro Aguirre, are both accused of torturing and killing the young boy. Fernandez will be having a separate trial.

Segal said she worked in the forensic unit at the hospital and her job that night was to provide service to the hospital for patients who had been victims of abuse.

She was asked to assess Gabriel when he was brought into the hospital, but his condition was so critical she could not do a comprehensive assessment as she normally would. He was later rushed to Children's Hospital Los Angeles.

The chart that night said Gabriel had fallen in the shower, but Segal said she knew that wasn't the case. She said Gabriel was on a ventilator and his heart had stopped at least two times.

"They had to resuscitate him with extreme measures," she said.

Segal added that Gabriel was only 88 degrees, which is a low temperature for a child. She said she was able to describe the injuries she did see in her assessment.

Those injuries included bruises all over his body, swelling on his arms and legs, BB gun injuries on his neck and groin where one remain lodged in the area and older injuries that were starting to heal. She added there was skin missing around his neck and trauma to his genitals.

She also described injuries such as cuts and marks to his head, cheeks, lips and neck. Gabriel had teeth missing and cuts inside his mouth, she said.

Virginia, Gabriel Fernandez's older sister, is shown in a sketch during her cross-examination in court on Friday, Oct. 20, 2017.

In addition to Segal testifying, Gabriel's sister Virginia was cross-examined. During the examination, the defense had Virginia admit that she feared her mother the most. On one occasion, she said her mother struck her with a baseball bat.

The 14-year-old told Aguirre's attorney that her mother would shoot Gabriel with BB's and beat him with a bat. On the night paramedics were called, Virginia said her mother ordered her to clean Gabriel's blood off the floor.