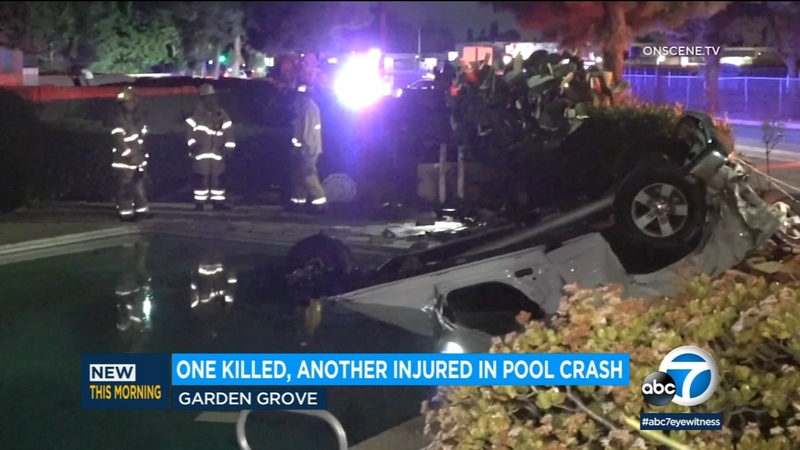 One killed, one seriously injured in wild Garden Grove crash

GARDEN GROVE, Calif. (KABC) -- Three people were killed Friday in a two-vehicle crash in Garden Grove that sent one vehicle into a pool and left the other vehicle overturned and up against a brick wall.

The vehicle that crashed into the pool sheared a hydrant and plowed through a brick wall near the corner of Euclid Street and Orangewood Avenue, where the second vehicle rolled over, the Orange County Fire Authority reported about 3:15 a.m.

The second vehicle reportedly came to rest against a wall.

Firefighters from the authority's heavy rescue truck were using a search camera inside the vehicle in the pool and developing a plan to remove the vehicle from the pool to confirm the number of victims inside, the OCFA said about 3:50 a.m.

Footage from the scene showed the vehicle upside down, with the front half submerged in the pool.

One driver and passenger died at the scene. The other driver died at a local hospital.

Details of what led up to the crash were not immediately available. The CHP is investigating.

Additional information about the individuals involved, such as their ages and identity, was not immediately released.