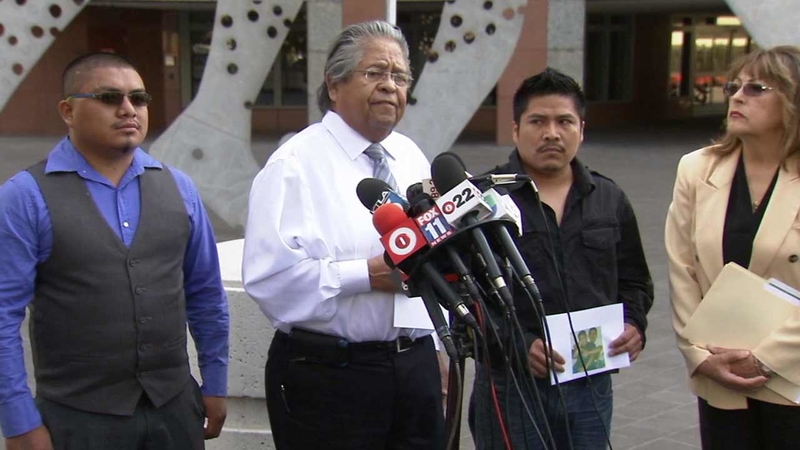 LOS ANGELES (KABC) -- The family of Ricardo Diaz-Zeferino, an unarmed man fatally shot by police in 2013, called for a federal civil rights investigation into the Gardena Police Department Wednesday.

Attorneys for the family of Diaz-Zeferino and a second man wounded in the shooting filed a letter asking the Justice Department to investigate.

"This is a poster child case as to why police departments cannot control their own officers, and why there's no discipline and no supervision, no investigation, and it's all controlled by the lawyers who defend the police officers," said attorney R. Samuel Paz.

The attorneys wrote that Gardena police routinely violate their own policies and California state law by failing to internally investigate fatal officer-involved shootings, including that of Diaz-Zeferino, 34. They cite 10 other fatal shootings involving Gardena officers since 2009.

The request comes a day after police dash cam video of the incident was released.

The video shows Diaz-Zeferino and two other people being questioned by Gardena police, who were searching for suspects who stole a bicycle outside a CVS. The stolen bike belonged to Diaz-Zeferino's brother.

Diaz-Zeferino was told repeatedly to put his hands up. He does so at first, but then puts them down. When he removed his ball cap, lowered his arms and reached out with his palms up, he was shot eight times. Eutiquio Acevedo-Mendez survived a gunshot wound to the back.

"The police didn't listen," Acevedo-Mendez said during a Wednesday news conference. "All they had to do was look. Not one police who fired stopped to search us."

The district attorney ruled the shooting was justified a year ago, and the city of Gardena settled a lawsuit for $4.7 million with Diaz-Zeferino's family and Acevedo-Mendez.