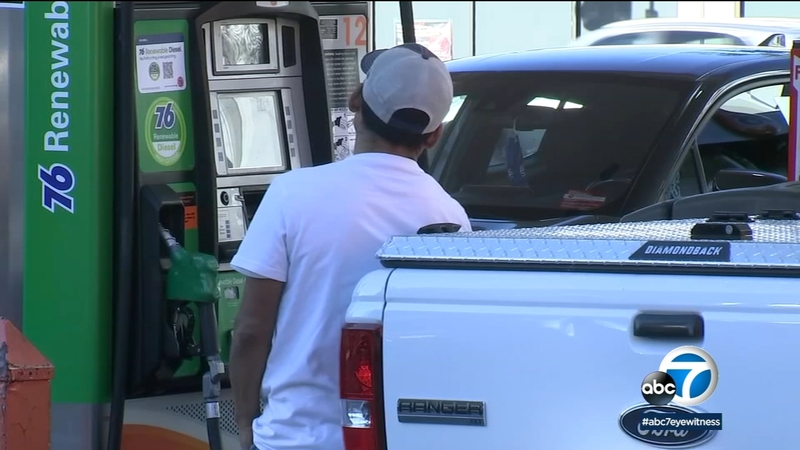 LOS ANGELES (KABC) -- The average price of a gallon of self-serve regular gasoline in Los Angeles County resumed increasing Saturday, rising three-tenths of a cent to $4.784, its 14th record high in the last 16 days.

A run of 17 increases in 18 days totaling 11.3 cents ended Friday when the average price was unchanged. It is 3 cents more than one week ago, 11 cents higher than one month ago and $1.18 greater than one year ago, according to figures from the AAA and Oil Price Information Service.

The Orange County average price dropped one-tenth of a cent to $4.76, ending a run of seven increases in eight days totaling 3.9 cents, including three-tenths of a cent Friday. It is 3 cents more than one week ago, 10.3 cents higher than one month ago and $1.164 greater than one year ago.

Americans are already dismayed by inflation at a 40-year high, and President Biden is warning that gas prices could get higher if Russian President Vladimir Putin chooses to invade Ukraine. It's a recognition of Biden's own risks ahead of the 2022 midterm elections: Inflation has become an albatross for Democrats despite the nation's strong economic growth last year.

"We're prepared to deploy all the tools and authority at our disposal to provide relief at the gas pump," the U.S. president declared Tuesday. "We are taking active steps to alleviate the pressure on our own energy markets and offset rising prices."

The cost of crude oil - and gasoline- began to climb over the past month as Putin massed forces on the Ukrainian border. The diplomatic back-and-forth has whipsawed financial and commodity markets as investors try to price in what an armed conflict and U.S. sanctions against Russia would mean for the global economy.

Even though the broad U.S. economy can absorb higher energy prices, American families have been seeing sharp increases in the price of food, energy and other goods. Forecasts from JPMorgan and other investment firms suggest that crude oil - already at about $95 a barrel - could exceed $125 a barrel due to tight supplies, which an invasion would intensify.