$6 a gallon? At least 1 gas station in LA hits the mark 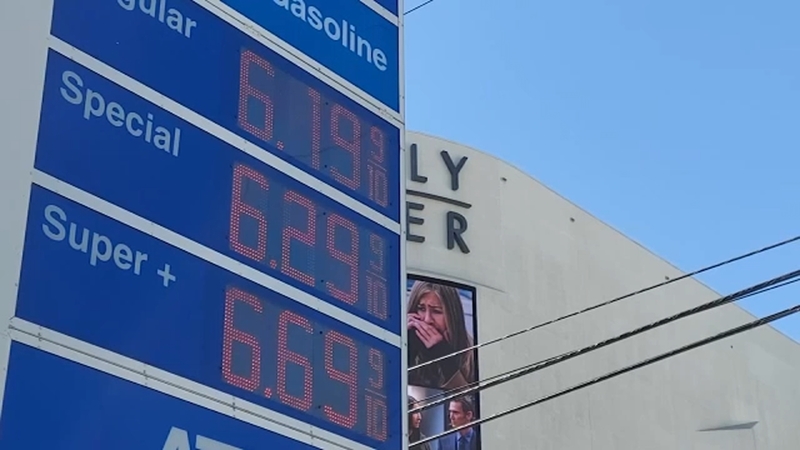 $6 a gallon? At least one gas station in LA hits the mark

LOS ANGELES (KABC) -- Angelenos have experienced a record rise in gas prices over the last month, and on Friday, gas hit well over $6 per gallon in at least one local station.

A Mobil station near the Beverly Center, just east of Beverly Hills, was advertising regular unleaded at $6.19 a gallon on Friday.

That was the county's 19th record high price in the last 22 days. It was also the largest one-day jump since Feb. 2, when the average price rose by 2.8 cents.

The average price has increased 22 times in 25 days, rising 17.7 cents, including 2.6 cents Thursday, according to figures from the AAA and Oil Price Information Service. It is 6.7 cents more than one week ago, 17.9 cents higher than one month ago and $1.143 greater than one year ago.

California's already record-high gas prices are expected to get even more expensive in the coming months, fueled by the crisis in Ukraine.

The Orange County average price is 6.6 cents more than one week ago, 17.7 cents higher than one month ago and $1.133 greater than one year ago.

"The escalation of tensions into all-out war has pushed up Brent crude prices above $100 a barrel and if that trend continues, we could see gas prices start going up more quickly,'' Doug Shupe, the Automobile Club of Southern California's corporate communications and programs manager, said referring to Russia's attack on Ukraine.

"Also, this week's U.S. Energy Information (Administration) report indicates that West Coast gasoline supplies are at their lowest levels of 2022, which could also add to upward price pressure.''