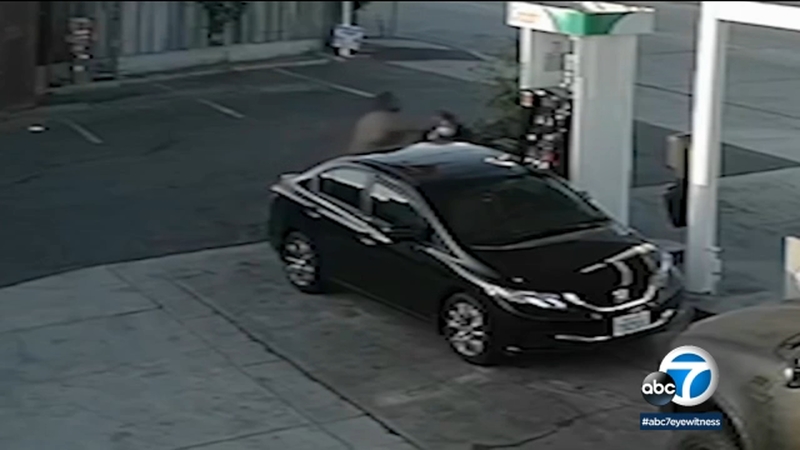 LYNWOOD, Calif. (KABC) -- A woman who was randomly attacked in a vicious assault at a Gardena gas station says she is now living in fear and feels lucky to be alive.

Surveillance video of the attack shows the suspect, later identified as Antoine L. Rainey, 37, calmly emerge from his SUV on the evening of May 30, walk over to the victim and start mercilessly punching her multiple times.

He eventually stopped and bystanders intervened but he was able to leave the scene. Authorities arrested Rainey in Long Beach on June 4. They say his mother saw the report on ABC7 and arranged for him to turn himself in.

The victim, a 25-year-old single mother, spoke with Eyewitness News about the traumatic experience.

A man suspected of viciously attacking a woman at a gas station in Gardena was arrested in Long Beach Friday.

In Spanish, she described how the suspect continued to punch and hit her and even though she was screaming no one came to help.

The injuries from the brutal attack forced her to go to the hospital. She now has a black eye, and is taking pain medications for head trauma.

Not to mention the emotional scars.

She describes herself as constantly "nervous and afraid" and says she never imagined something like this happening to her.

Police say Rainey suffers from schizophrenia and is paranoid about being followed.

He hasn't been taking medication, according to his mother.

The day before this attack, Rainey allegedly attacked a 63-year-old woman at the same intersection.

The survivor of the gas station attack says the beating felt like it lasted a lifetime and witnesses were slow to intervene.

She is relieved Rainey is now in custody but traumatized, and hasn't returned to work since.

She says she feels lucky to be alive.

She says her 8-year-old daughter now wants to become a police officer to stop attacks like this from happening to anyone else.

Police say Antoine Rainey has a violent criminal history and was on parole at the time of these attacks.

He is scheduled to appear in a Compton courtroom Tuesday at 8:30 a.m.