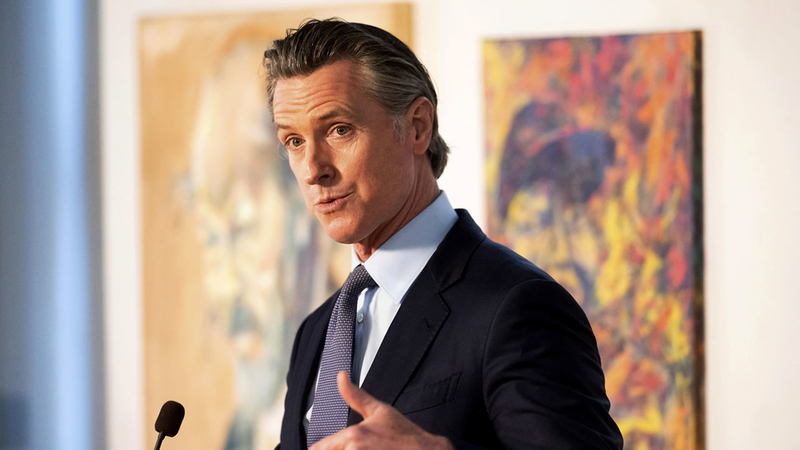 The effort to recall Governor Gavin Newsom has submitted enough verified signatures to qualify for a recall election, according to an update from the California Secretary of State's office. The latest update says 1,626,042 signatures have been submitted and verified. To qualify, they needed 1.495 million signatures.

This major milestone means it is nearly all but inevitable a recall election will happen later this year, however it is not a done deal yet.

Counties still have until April 29 to submit the rest of the verified signatures and that will then be followed by a 30-day period where people can withdraw their signatures. Former State Senator Don Perata has launched an effort -- called "Stop the Steal" -- to encourage people to remove their names from the petition. However, even Newsom's team believes it is unlikely the effort will ultimately be successful in blocking the recall.

In response to the announcement on Monday, Governor Newsom tweeted: "This Republican recall threatens our values and seeks to undo the important progress we've made - from fighting COVID, to helping struggling families, protecting our environment, and passing commonsense gun violence solutions."

This Republican recall threatens our values and seeks to undo the important progress we’ve made -- from fighting COVID, to helping struggling families, protecting our environment, and passing commonsense gun violence solutions.

There's too much at stake. pic.twitter.com/5ZEszlrcYl

"Sacramento needs an honest leader with a clear vision," she wrote in her announcement. "I can't wait to lead, to help and most importantly disrupt the status quo once again."

For some, Jenner's decision to get into the race brings back memories of the 2003 recall election of Governor Gray Davis -- the first and only time a governor was recalled in California. In that race, 135 candidates ran to replace Davis, including actor Gary Coleman, media mogul Arianna Huffington and, of course, celebrity bodybuilder Arnold Schwarzenegger. (Former adult film star Mary Carey also ran in 2003. She announced this month that she will be running again this time, too.)

Much like Davis' strategy in 2003, Newsom's team has framed the recall as an effort by the extreme right-wing to enact their conservative political agenda.

"This is a Republican effort...this is a Donald Trump effort," political consultant Ace Smith, who is working with Newsom, said at a recent Sacramento Press Club panel. "This is a debate about the direction this state should go in."

Anne Dunsmore, with Rescue California, fired back, arguing the recall is backed by people from both political parties upset about Newsom's record. "Gavin Newsom has to answer to the people of California," Dunsmore said. "Good luck if you want to go on and on about that, but you're talking to a universe of people, not all Trumpers."

The initial petition to recall Newsom began on June 10th of last year by former Yolo County Sheriff sergeant Orrin Heatlie. The group was granted a 120-day extension to gather signatures due to the pandemic, and thus had until March 17 to submit the required signatures.

Heatlie said the effort gained steam after Newsom's dinner at The French Laundry, followed by another lockdown in California and frustration over the slow reopening of schools and vaccinations.

But with an election still months away, Democrats are hoping time will be on Newsom's side. He has recently worked to reopen schools and ramp up vaccine distribution. He also announced the state will reopen on June 15.

So, when will there be an election?

After the signature withdrawal period, there is then another 30-day period where the legislature will review a cost estimate. After that, Lt. Governor Eleni Kounalakis will set the date for some time within the next 60 to 80 days -- meaning Californians most likely will be going to the polls late summer or fall.
Report a correction or typo
Related topics:
politicssan franciscosacramentogavin newsomarnold schwarzeneggergovernorrecallcaitlyn jennercalifornia governor recallelectionpolitics
Copyright © 2022 KGO-TV. All Rights Reserved.
GAVIN NEWSOM
CA gas prices will be even more expensive starting Friday. Here's why
CA lawmakers OK nearly $308 billion spending plan
California advances Texas-style lawsuits over illegal guns
Abortion protections to be on California ballot in fall
TOP STORIES
LA County could hit 'high' COVID level in July, prompt return of masks
Here's what to know about the end of CA's eviction moratorium
California late start law aims to make school less of a yawn
LAX expected to be second busiest US airport over July 4th weekend
Woman searching for brother reported missing in Redondo Beach
Lawyer: Nipsey Hussle lifted up neighborhood he was gunned down in
Apple's newest CarPlay feature will make buying gas easier
Show More
How to save money when buying a new car in an inflated market
Orange County confirms 1st presumptive case of monkeypox
OC woman attacked and sexually battered inside Irvine storage facility
Silver Lake restaurant offers free food in exchange for Sriracha
USC, UCLA moving from Pac-12 to Big Ten in 2024
More TOP STORIES News