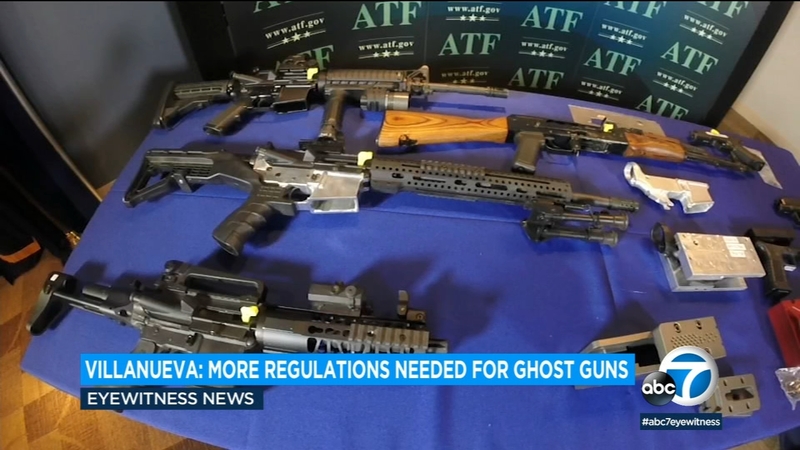 LOS ANGELES (KABC) -- Los Angeles County Sheriff Alex Villanueva called for a "total ban" on the sale and creation of "ghost gun'' kits that allow felons and others barred from possessing guns to have firearms.

Ghost guns, also known as kit guns or 80% guns, are virtually untraceable weapons that can be made at home using legally purchased parts to complete the 80% already assembled. You can legally buy a ghost gun building kit at gun shows and online.

A ghost gun was used in the Nov. 14 shooting attack at Saugus High School that killed two students and wounded three others before the 16-year-old shooter turned the gun on himself and later died, Villanueva said shortly after the shooting.

Villanueva said over the last year, the number of ghost guns turning up in county investigations has jumped by 50%.


He talked about the need for new laws in an interview with "60 Minutes."

"We need national laws, federal, from Congress that covers a total ban on the creation or the selling of these ghost guns kits,'' Villanueva told correspondent Bill Whitaker, who then asked, "state-by-state is not going to do it?''

"It doesn't because then you can just defeat it by going to another state,'' Villanueva said.
In response to a question from Whitaker about "Where on your list of worries do these ghost guns fall?'' Villanueva responded, "Along with terrorism, active shooter, this is way up there on the list.''

An Orange County lawyer faces federal charges after being accused of conspiring to sell firearms without serial numbers, also known as "ghost guns."

Villanueva also said the number of ghost guns turning up in investigations by his department has gone up 50% over the past year.

Connecticut, New Jersey, Washington and the District of Columbia have similar restrictions.