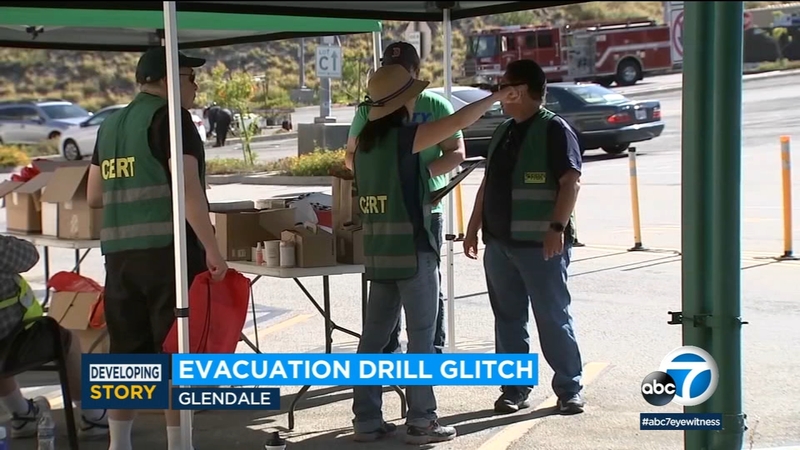 Glendale 'evacuation alert' sent to phones across SoCal was a drill

GLENDALE, Calif. (KABC) -- A Glendale "public safety alert" that was sent to cellphones and other mobile devices across Los Angeles, Orange and Ventura counties on Saturday morning was part of a drill, officials said.

The notification, which was sent shortly after 9 a.m., urged residents of Chevy Chase Canyon to "safely evacuate your home and proceed to the evacuation site" at Glendale Community College.

Minutes later, the city of Glendale tweeted: "THIS IS A DRILL: #MyGlendale is conducting an evacuation exercise in Chevy Chase Canyon."

Many people who were unnerved by the alert took to social media -- at first to express their alarm, followed by bemusement or annoyance.

Everyone in LA googling where Chevy Chase Canyon is right now.

"How stupid!" Diana Abraham said on Facebook. "Must have scared the people in that area unbelievably."

About 30 minutes after the first notification, a follow-up was sent out that read: "Disregard evacuation message for Chevy Chase Canyon. Training exercise only."

Officials later said the alert was not supposed to be distributed to such a wide area.

"Due to a glitch in the messaging software, incorrect messaging was distributed throughout Los Angeles County. The City is working with our partners to investigate,'' the city of Glendale said in a statement.

The drill had been planned for 8:30 a.m. by the Glendale Fire Department and Chevy Chase Canyon Estates Association. Officials said the canyon has nearly 1,900 structures and 5,500 residents, and is marked by steep hillsides necessitating preparation for an evacuation in the event of a fire or other emergency.

THIS IS A DRILL: #MyGlendale is conducting an evacuation exercise in Chevy Chase Canyon.
For those who live in the Chevy Chase Canyon: Safely evacuate your home and proceed to the evacuation site located at the Glendale Community College Parking Lot B: https://t.co/zjTZ6CMN6E