VIDEO: Drivers get into dangerous road rage clash on 134 Fwy in Toluca Lake 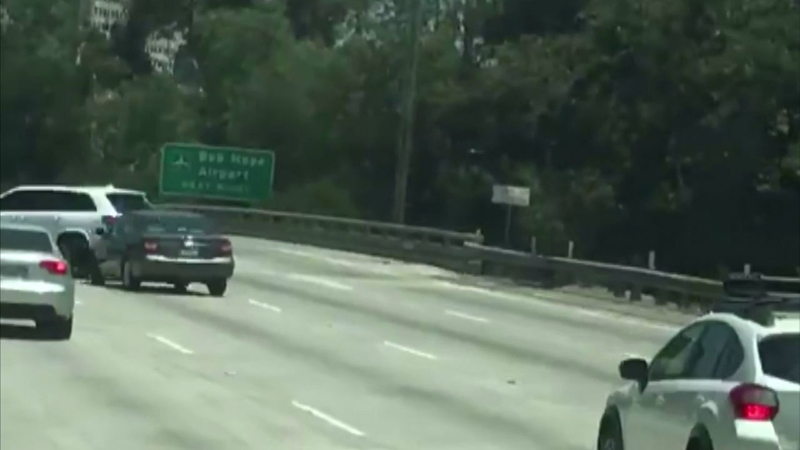 The witness told Eyewitness News the incident happened around 1:20 p.m. as he and a passenger were heading to Pasadena on the freeway.

The man, who did not want to be identified, said two women were driving when the incident happened in the afternoon. He said the confrontation went on for more than two minutes.

In the video, a gray sedan and white Jeep Cherokee are seen speeding alongside one another when the white SUV suddenly cuts in front of the sedan and the driver slams on their brakes.

"I think the girl in the white car, she was very angry and she tried to crush the, I think, Honda Civic," he said.

There are a couple of instances where the SUV stays in front with the brakes continually being slammed as the sedan driver tries to get away.

A witness captured footage of a dangerous road rage incident on the 134 Freeway in Toluca Lake Friday morning.

During that confrontation, the SUV driver ends up almost going sideways on the freeway to block the sedan, causing nearby traffic to slow and people to blare their horns.

"The Honda Civic tried to get out around the white car that stopped. It looked like an accident," he said.

The drivers then proceed to speed off again and in the distance the sedan driver is seen exiting Pass Avenue in Burbank. While the driver is trying to exit the offramp, the SUV cuts in front of the vehicle again in an attempt to stop them.

"I've never seen that before and it looked scary," the man said.

The sedan driver flees from the SUV and exits the freeway. One of the witnesses filming the scene could be heard saying in Spanish that the police were nearby.

It was unclear what happened when the women got off the freeway. The witness said a motorcycle cop was in the area, but not a California Highway Patrol officer.