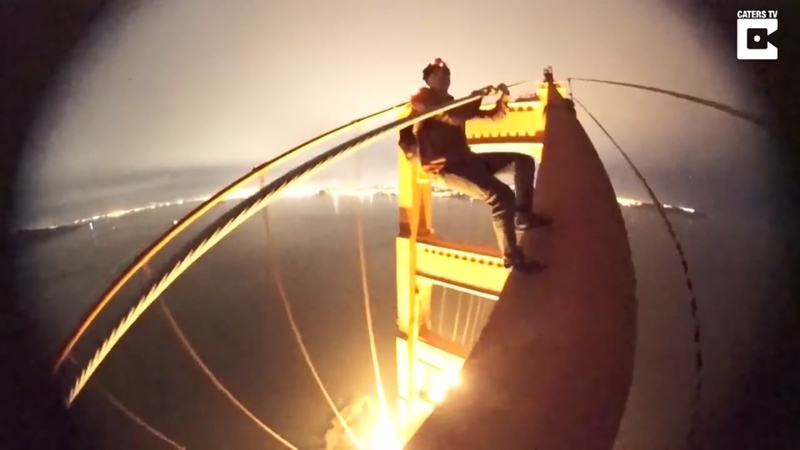 SAN FRANCISCO -- The video will surely make your palms sweaty and stomach churn - two young daredevils climbed to the top of San Francisco's Golden Gate Bridge. It was all caught on camera and it's raising some serious questions.

"The Golden Gate Bridge is not an amusement park ride, it is vital public infrastructure and it's a symbol of our community. People should not come here and use it in ways for which it is not intended. They should not put themselves and others at risk. And if they do, we will bring the full consequences that we can, both civilly and criminally, to bear upon them," Mulligan said.

In the video, daredevil Peter Teatime and his exploring partner Tommy Rector are seen sprinting up the bridge's frame, even doing backflips and somersaults. At one point, the two are seen hanging off the edge of one of the bridge's towers, seemingly without any safety equipment, with just their fingertips for support.

At the news conference, Golden Gate Bridge Patrol Captain Lisa Locati said the duo's "path of travel did not trigger any alarms."

Locati went onto say, "That having been said, their behavior could have harmed motorists below. And does highlight a public safety issue that needs to be addressed. It also raises questions about how such an unauthorized climb is possible. If either of these young men had slipped or fallen, there could have been serious harm to motorists below."

He added, "Our efforts are focused on protecting the structure. The actions of these individuals did not harm the structure, nor could they have harmed the structure. However, they do highlight, very clearly, that we have a shortcoming with respect to a roadway safety threat associated with people dangling from the bridge above traffic."
Related topics:
northern californiasafetyyoutubegolden gate bridgecaught on cameradaredevil
Copyright © 2021 KGO-TV. All Rights Reserved.
TOP STORIES
TX mother, boyfriend arrested in case of 9-year-old's decomposing body
LA creates basic-income program to help 3,000 families
Family of man killed by Tustin police wants officer behind bars
Kobe crash lawsuit: Judge grants depositions of sheriff, fire chief
LA, Long Beach ports to fine companies for lingering containers
Violent brawl breaks out at Miami dog show
All migrant children at Pomona shelter reunited with family, sponsors
Show More
Pandemic drinking leads to spike in liver transplants
Political comedian Mort Sahl dies at 94
Los Angeles city employees have until Dec. 18 to get vaccinated
Investigators identify people found dead inside home on Balboa Island
LAPD investigating alleged sexual assault of student at Hamilton High
More TOP STORIES News