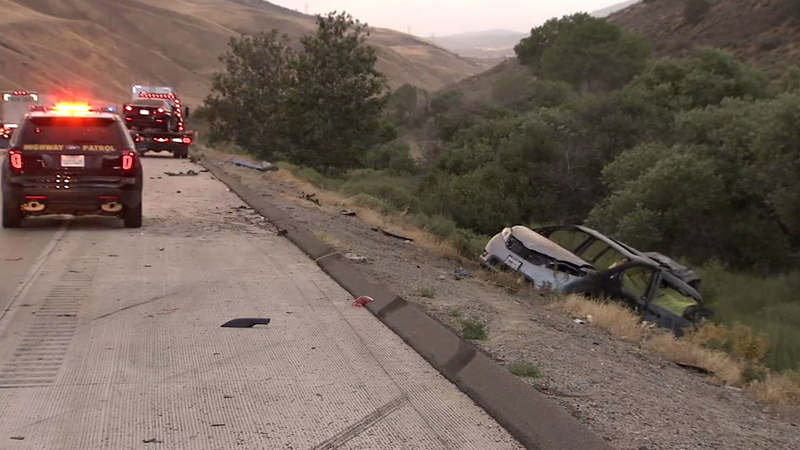 GORMAN, Calif. (KABC) -- Two mothers and four children died in a fiery wreck on the 5 Freeway near Gorman early Tuesday, while two injured fathers had to be held back from the flames trying to save their families, officials said.

The two Northern California men were airlifted to a nearby hospital for burns they sustained while trying to save their families.

The two men were later identified as Aaron Hon Wing Ng, 34, of San Francisco and Wei Xiong Li, 45, of Daly City. The identities of their wives and children weren't released. The ages of the children were 2, 3, 4 and 5 years old, according to the CHP.

Officials believe the two families in a rented minivan were possibly vacationing in Southern California.

The incident started around 3:30 a.m. near Gorman School Road. The minivan carrying the two families collided with a black BMW and stopped on the far right shoulder of the freeway, still partially in the travel lane. The minivan was then rear-ended by a big rig, pushed into a ravine and caught fire.

Two California Highway Patrol officers saw the van catch fire, and both husbands, who were able to escape, ran up to the officers, pleading for help.

Williams and his partner tried to help the fathers rescue their loved ones, even using a fire extinguisher, but to no avail. They eventually had to hold the men back from the van.
Both fathers suffered severe burns to their hands and faces.

A SigAlert was issued for Frazier Mountain Park Road, and several lanes were closed for the investigation.