FEMA trailers to be distributed to homeless people throughout California, Gov. Newsom says 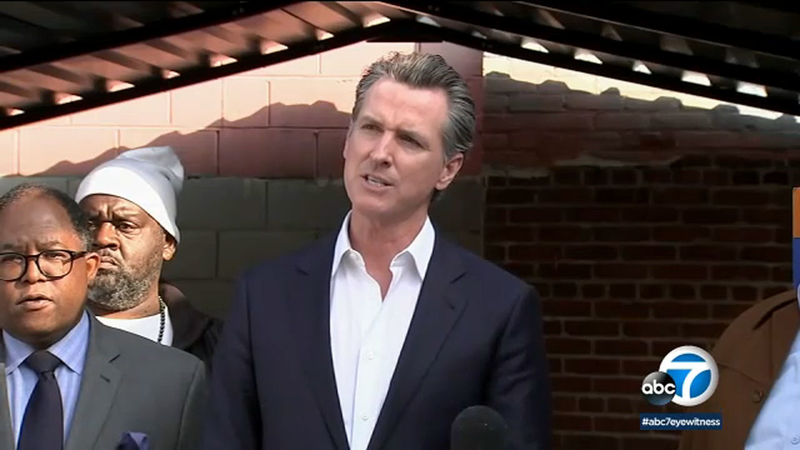 FEMA trailers to be distributed to homeless throughout California

LOS ANGELES (KABC) -- Gov. Gavin Newsom on Tuesday announced details of how California will distribute 100 Federal Emergency Management Agency trailers throughout the state as part of an ongoing effort to address the homeless crisis.

Newsom discussed the move at a news conference in Riverside during his Southland visit to promote his billion-dollar plan to deal with homelessness.

"We're bringing out medical units and tents that we use in post-disasters," he said.

Fifty-eight trailers are currently available and 42 others, which are currently occupied by victims of the Camp Fire, will be vacated soon, the governor said.

California officials have identified 1,330 parcels of vacant state land, according to Newsom, 100 of which are being immediately transferred to local authorities to make sites available to park those trailers.

Gov. Gavin Newsom is continuing his homeless tour across the state. This morning he’s in Riverside, speaking with some of the homeless. An out of work mechanic told the Governor, “I’m just trying to recuperate and stay out of trouble.” pic.twitter.com/FKQE67eTgM

Tuesday's visit also included a stop in Los Angeles. The governor is meeting with people experiencing homelessness and providers who work to house and assist them.

While in Riverside, Newsom stopped at an emergency shelter and the city's Access Center, which provides services to the homeless, including outreach, housing placement, employment development, and homeless prevention resources.

Gov. Gavin Newsom announced details of how California will distribute Federal Emergency Management Agency trailers throughout the state as part of an ongoing effort to address the homeless crisis.

"This is a crisis," he said, "this is unacceptable, everybody has the right to be angry and concerned."

Newsom went to Los Angeles to meet with staff and residents at a board and care home.

The governor promised an immediate and massive amount of homelessness funding heading to Southern California.

"In the next few weeks, this city and the immediate region in and around Los Angeles is going to receive a quarter of a billion dollars," Newsom said while addressing the homeless crisis at the Harvard Heights board and care facility.

Newsom has faced criticism from President Donald Trump over his efforts to address homelessness.

Newsom will also make trips to the Central Valley and Bay Area later in the week.

An advisory council appointed by the governor is calling for voters to consider a legally enforceable mandate to end homelessness. The group wants lawmakers to put a constitutional amendment on the November ballot giving governments one year to find solutions to the homeless crisis.

After that, a judge could require jurisdictions to do whatever it takes to end homelessness, although it is not clear what that entails.

The tour comes after the release of Newsom's state budget proposal.

In the budget proposal, he requests more than $1 billion to fight homelessness with $750 million of that for temporary housing and help get people off the streets. The governor also wants to transform Medi-Cal, getting health care providers to start integrating physical and behavioral health in their services.