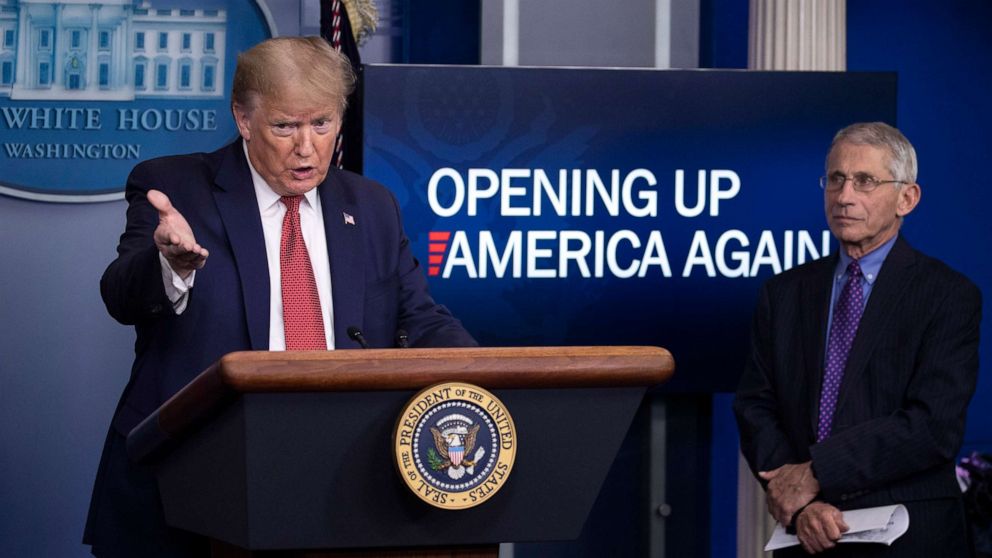 While President Donald Trump says his new three-phase roadmap to reopen the country amid the pandemic calls for "one careful step at a time," some governors and public health officials say the plan lacks a critical component: widespread testing.

In rolling out his plan Thursday, the president continued to defend the lack of a nationwide testing strategy, saying it would be "ridiculous" for the federal government to be involved in administering tests.

"We're going to be helping with testing. They're going to be doing the testing," Trump said, referring to state and local governments. "It's got to be a localized thing, and it really has been since I've been involved. Because I came in and the federal government supposed to do testing of parking lots in the middle of a certain state that's 2,000 miles away. It's ridiculous."

He again punted responsibility back to the states in a tweet on Friday: "The States have to step up their TESTING!"

While the idea of testing every single American may not be feasible or necessary, what many business leaders, governors and experts have called for is testing a large enough portion of the population, on a frequent and rapid basis, to provide comprehensive monitoring as people go back to work, stores and other public places.

They say the United States is not yet there.

Even as the country has seen a significant expansion in testing capacity in recent weeks, shortages persist within the patchwork of state-by-state testing systems.

"The federal government cannot wipe their hands of this and say, 'Oh, the states are responsible for testing,'" Cuomo said. "We cannot do it. We cannot do it without federal help."

He accused Trump of avoiding responsibility on a hard-to-fix issue.

He's called for Trump to invoke the Defense Production Act, a law that allows the president to force companies to sign contracts and gives him the ability to set price controls.

The president could use the act, which he has employed to push some firms to build ventilators, to compel manufacturers to make testing components and dramatically expand the capacity of private labs to churn them out.

"We need an unprecedented mobilization where government can produce these tests in the millions," Cuomo said last week.

The Democratic governor of hard-hit Michigan, Gretchen Whitmer, told ABC News Chief Anchor George Stephanopoulos on "Good Morning America" Friday that, in order to safely reopen, her state needed to be able to test "anyone who has symptoms" and ideally for those who have been around those with symptoms.

"We need some assistance from the federal government when it comes to swabs and reagents and making sure that we've got the kind of robust testing that we need so we've got data that we can actually rely on," Whitmer told NBC News on Wednesday.

Trump has long-resisted calls for the federal government to pursue a comprehensive, nationwide testing strategy.

"Do you need it? No. Is it a nice thing to do? Yes," Trump said on April 9, saying the concept of nationwide testing is impractical because of the size of the U.S. population.

"We're talking about 325 million people, and that's not gonna happen, as you can imagine. And no -- it would never happen with anyone else either," Trump said.

But John Brownstein, an epidemiologist at Boston Children's Hospital and an ABC News contributor, warns of the dangers of a patchwork of state-run programs where not all state officials place the same value on broad testing.

"By not talking about a national strategy in testing, you're sort of leaving it to the states to make decisions on their own about what the right testing capacity is," Brownstein said. "These are not individual countries. We need to have some sort of federal strategy that states can start to implement."

The White House's coronavirus response coordinator, Deborah Birx, on Thursday called the development of testing "a partnership between the state and the federal government" and said the Centers for Disease Control and Prevention would deploy to "every state" to support state governments in determining whether it was safe to roll back restrictions.

"I know it's been dynamic," she said in an interview with CNN. "It continues to be a work in progress."

Birx echoed the president's position in saying it would be unrealistic to achieve regular testing of the full American workforce, which last year totaled over 157 million, according to the federal government.

"That's why we have to be strategic and smart enough that we combine surveillance opportunities in the community," she said.

Birx said the Food and Drug Administration had been working with states to determine whether alternative components could be used to conduct tests -- such as cotton swabs like Q-tips -- and to identify laboratories and "all the things that they need."

As of Friday, the United States had averaged about 145,000 tests conducted per day over the previous week.

Experts have offered a range of estimates for how many tests they believe the United States needs to be able to carry out in order to begin lifting social distancing restrictions and regain some semblance of normalcy.

Scott Gottlieb, who led the FDA from 2017 until last year and has maintained a line of communication to the White House in offering his counsel through the crisis, has estimated that the United States needs to be able to conduct at least 750,000 tests a week, based on how many medical visits took place during the more severe 2017-2018 flu season. Meanwhile, the director of the Harvard Global Health Institute, Dr. Ashish Jha, believes the country needs to be able to test about 500,000 people each day.