Neighbors complain of drug use, fighting at Granada Hills homeless encampment near park 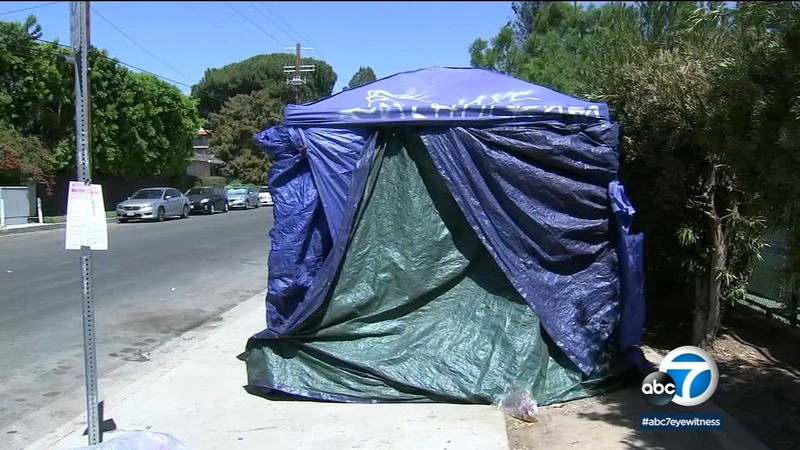 The encampment is right up against the fence at Petit Park in Granada Hills. It is raising concerns among the residents.

Emails to Eyewitness News from neighbors describe fighting among the unhoused, drug use and blocking portions of the sidewalk.

Dana Ross lives near the park and he has concerns with the handling of the situation as of late.

Richmond Mayor Tom Butt is fighting the homeless crisis by raising funds to pay for a year of rent to help those transitioning from homelessness.

"It's been about two years and it started with the support they were getting at the park with the trailers and the community center, but when that ended, the city and county just let those people flounder and really they had no other place to go," Ross said.

L.A. City Councilman John Lee represents the area. He and other members of the city council have been looking for ways to get people off the streets throughout the city. They've had some success.

A couple of neighbors who live near Petit Park, who didn't want to be identified for safety concerns, say they'd like to see the men and women get the help they say they need.

The city will spend up to $3 billion over the next five years to develop as many as 16,000 beds or housing units for the homeless.

"We just can't continue to allow this to happen. We have children that are walking through these areas, and it's not safe," another neighbor said. "There are needles, there's feces, there's unpredictable behavior and this is not a way for a community to be."

Some other residents told Eyewitness News that long term, they're hoping the city can come up with a compassionate solution to get the folks off the sidewalks and the help they need.