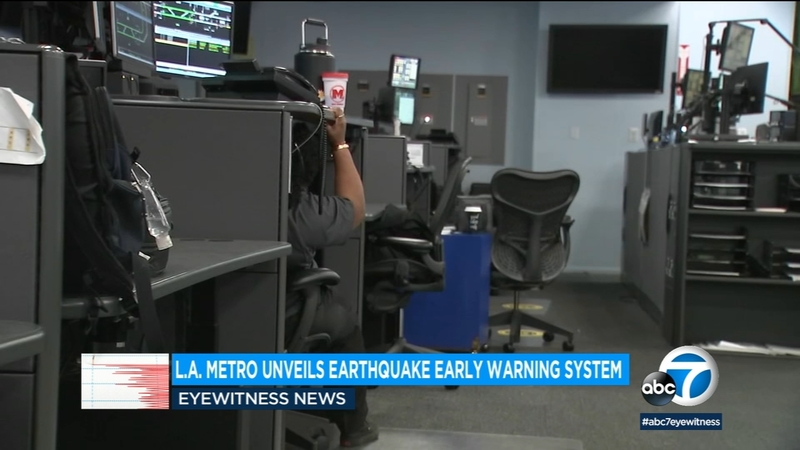 People in government offices, businesses and schools throughout Southern California stopped everything for a minute Thursday to "drop, cover and hold on" during a statewide earthquake preparedness drill, now in its 13th year.

The Great California ShakeOut of 2021 took place at 10:21 a.m. More than 7.5 million Californians were slated to participate in the drill, according to the ShakeOut website.

The objective is to prepare people for a 7.8-magnitude earthquake or larger along the southernmost portion of the San Andreas Fault. The U.S. Geological Survey says there is a 31% chance of a magnitude-7.5 earthquake or higher hitting L.A. in the next couple of decades.

L.A. Mayor Eric Garcetti says knowing what to do during a major earthquake is critical.

Government officials say Californians should be prepared to be self-sufficient for 72 hours after a major disaster by having a first aid kit, medications, food and water. It's also important to know how to turn off the gas in your home in case of leaks.

Officials say such a tectonic shift could produce waves of movement for hundreds of miles, over four minutes. According to the USGS, some 2,000 people would die, tens of thousands would be injured and more than $200 billion in damage would result. The cataclysm would have 50 times the intensity of the Jan. 17, 1994, Northridge earthquake, which had a magnitude of 6.7.

Hundreds of aftershocks would ensue -- a few of them nearly as big as the original quake, according to the USGS.

The American Red Cross on Wednesday reminded people to find cover under a table or sturdy piece of furniture and hold on during an earthquake. It also clarified that using doorways as protection is a myth. People who are outside when an earthquake hits should stay away from buildings, power lines, trees and street lights, and drop to the ground until the shaking stops. Motorists should stay away from bridges, overpasses and power lines during an earthquake, and find a clear location to pull over.

The Metro transit system on Thursday unveiled an expanded implementation of an earthquake early warning system as part of the ShakeOut. The system is in place at all bus and rail divisions and uses the USGS ShakeAlert system to detect earthquakes with a 4.8 or greater magnitude and give people a few extra seconds of warning. Metro believes its deployment of the ShakeAlert system is the largest installation of an early warning system at a U.S. transit agency.

"We want to be able to protect our critical infrastructure, which protects our passengers, our patrons, to ensure their safety before an earthquake even occurs," said Aldon Bordenave, Senior Director of Emergency and Homeland Security with L.A. Metro.