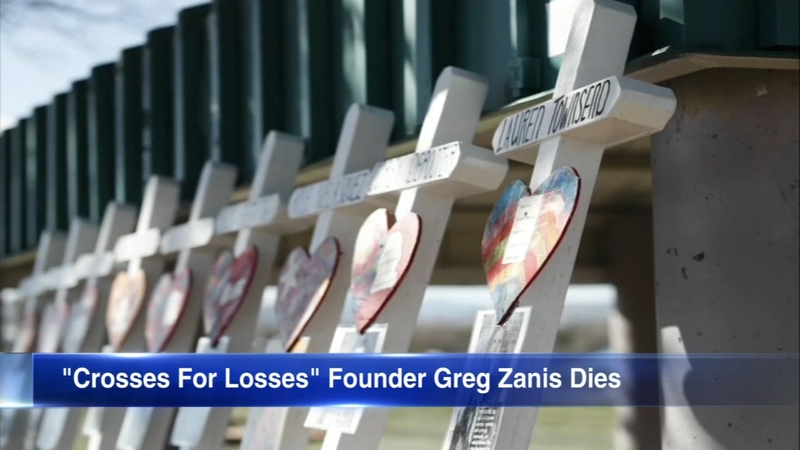 Greg Zanis, the man who built more than 27,000 white crosses to commemorate victims of gun violence in America, died Monday morning from cancer. He was 69.

Zanis began making those crosses in 1996, the same year his father-in-law was shot and killed.

Then he was contacted by the mother of Nico Contreras, a 6-year-old who had been shot and killed in his hometown of Aurora, Illinois. She asked him to build a cross in Nico's honor.

In 1999, he received a call from the family of one of the victims of the Columbine school shooting. He traveled to Colorado to deliver their crosses and began traveling more and more to the scenes of mass shootings.

Greg Zanis, the Aurora man who has built more than 27,000 white crosses to commemorate victims of gun violence in America, says he has ended his mission.

He traveled to Newtown, Conn., in the wake of the Sandy Hook shooting, to Las Vegas after the massacre at the Harvest Music Festival, and to Orlando to commemorate the victims of the Pulse Nightclub shooting, even though he got pushback from his church.
Not even a year after the Las Vegas shooting, Zanis traveled to Santa Fe, Texas, where 10 students and teachers died in a high school shooting.

He did not just create crosses; he built Stars of David and other symbols to honor the victims of senseless violence.

Last week, a tribute was held for Zanis as supporters held a drive-by parade to show their appreciation.

A tribute held in Aurora Friday sought to honor a man who has touched countless lives by bringing handmade crosses to crime scenes and disasters for more than two decades.

He asked the group Lutheran Church Charities to take over, and they're discovering just how large an impact Zanis made.

Aurora Mayor Richard Irvin issued a statement saying, "Mr. Greg Zanis was a giant among men. He was a man of action who simply wanted to honor the lives of others. In return, his life was one of honor and one that was celebrated throughout our nation and world. Heeding to the scripture 'pick up your cross and follow me,' Mr. Greg Zanis did just that. He picked up the crosses he made and followed his mission in the noblest of ways. His legacy shall forever be remembered in his hometown of Aurora and around the globe."
Report a correction or typo
Related topics:
societyschool shootingcolumbine school shootingcarsgun violencemass shootingsandy hook elementary school shootingobituaryu.s. & worldlas vegas mass shootingcancer
Copyright © 2022 KABC Television, LLC. All rights reserved.
TOP STORIES
Uvalde victims latest: Slain teacher's husband dies of heart attack
Saugus shooting survivor makes emotional plea during student walkout
4th grader 'did what she had to to survive' Uvalde shooting, aunt says
19 kids, 2 teachers killed in TX school shooting; gunman's mom speaks
Bay Area mom shares teen's tragic death to warn of 'sextortion' scam
Holocaust survivor and WWII spy reflects on Russia-Ukraine war
Amber Heard ends testimony asking Johnny Depp to 'leave me alone'
Show More
Texas tragedy brings calls for gun control legislation
Inland Empire gang sweep results in 17 arrests plus gun seizures
Depeche Mode's Andy Fletcher dead at 60
Uvalde man says his daughter was killed trying to call 911 on shooter
LA health officials: All signs keep pointing to summer COVID-19 surge
More TOP STORIES News