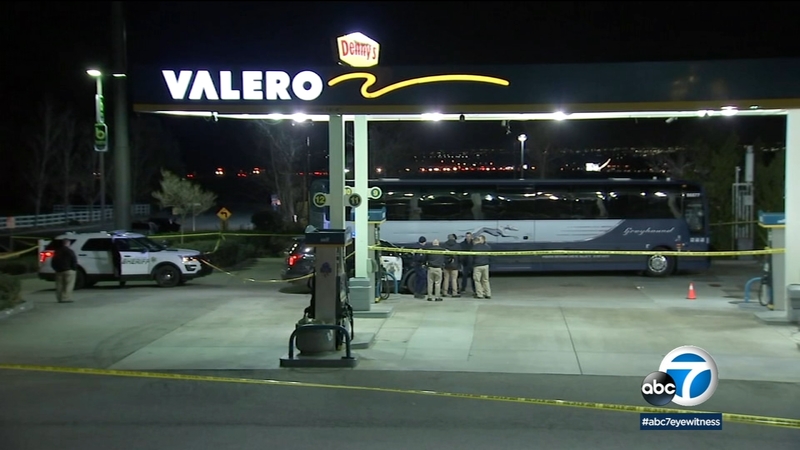 1 killed, 5 wounded in shooting on Greyhound bus near Lebec

LEBEC, Calif. (KABC) -- A gunman opened fire aboard a packed Greyhound bus on the 5 Freeway near Lebec early Monday morning, killing one person and wounding five others before the driver pulled onto the shoulder and worked with other passengers to coerce the suspect off, California Highway Patrol said.

The male suspect was taken into custody after the shooting just before 1:30 a.m. in the Grapevine area, according to authorities.

CHP Sgt. Brian Pennings said the bus driver was able to convince the shooter to get off the bus and continued on to the Grapevine Road exit before parking at a Valero gas station. The 6848-1 schedule bus was carrying 42 passengers, including a 6-year-old and 8-year-old who were uninjured, traveling from Los Angeles to the Bay Area.

Several passengers disarmed the gunman and administered first aid to the victims, officials said. The weapon, a semi-automatic handgun, was found on the bus with several other magazines.

According to CHP, a 51-year-old female passenger from Colombia died at the scene.

A motive for the shooting was not immediately clear, Pennings said, calling the shooting on a Greyhound "extremely rare."

"In my career I'm not aware of this ever happening," he said.

CHP identified the suspect as Anthony Devonte Williams, 33, of Capitol Heights, Maryland. He was booked at the Kern County jail on suspicion of murder and attempted murder.

Authorities say there is no evidence to indicate any of the victims were known to the shooter or that there was terrorism involved.

Greyhound said it is working with authorities to determine if the surveillance camera on the bus was working and if it captured any of the incident.

The bus driver was hailed for his quick response to the shooting.

"The bus driver, his actions were very appropriate and one could say heroic in the sense that he immediately pulled to the right shoulder," Pennings said.

He added that the bus driver was "instrumental" in convincing the suspect to exit the bus. Additional information on what occurred immediately after the shooting has not yet been released.

Passengers who were not injured were questioned by investigators before being picked up by another Greyhound bus.

Greyhound released a statement on the shooting: "Our thoughts and prayers go out to everyone and every family member impacted by the incident today. We are gathering details and will assist the Kern County police in every way possible during their investigation."