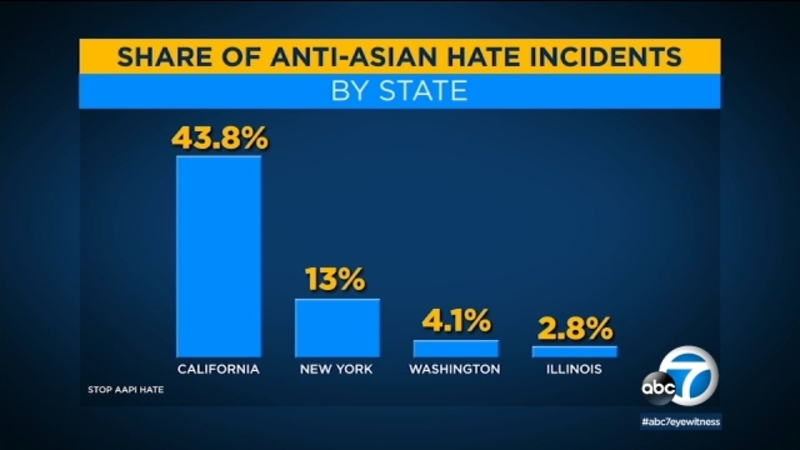 LADERA RANCH, Calif. (KABC) -- An Asian-American family has not been able to peacefully settle into their Ladera Ranch neighborhood because of harassment from what appear to be a group of teenagers.

Haijun Si shared surveillance camera video with Eyewitness News. The recordings show kids running up to the door, ringing the bell, sometimes yelling, then running off.

Si said deputies with the Orange County Sheriff's Department suggested he install cameras, along with a fence to discourage the offenders, but Si said it continued.

"Every day, every day and every night," Si said.

The father of four said the problem started not long after his family moved in back in September. There was pounding on their doors and windows, rocks hurled at his property.

"From the hill to my backyard," Si said.

In one of the recordings, an offensive, racially charged remark is clearly audible. A teen knocks, yells the words, "Hello China," and runs off.

According to Stop AAPI Hate, this South Orange County family is not alone.

The center tracks the escalating xenophobia against Asian-Americans and Pacific Islanders resulting from the COVID-19 pandemic. Between March and the end of 2020, Stop AAPI documented 2,808 firsthand accounts of anti-Asian hate. The majority came in from California at nearly 44%, followed by New York, with 13%.

Congresswoman Michelle Steel and Congresswoman Katie Porter are working to protect the AAPI community with a bipartisan resolution, H.R. 153, introduced in the House of Representatives Monday.

Steel said Wednesday the resolution goes beyond condemning hate crimes. She said it encourages perpetrators to be brought to justice by both local and federal law enforcement.

"So, they can work together. It's going to be much more of the partnership between federal government and local governments," Steel said.

As H.R. 153 works its way to the House floor for a vote, word is out about the Si family, along with community support.

Neighbors have organized shifts to keep an eye on the home.

Si just wants the parents of those responsible to teach their kids this is wrong.

"It's not funny. It makes much harm to our family. It hurts my kids. It's trouble to this neighborhood, to this community," Si said.