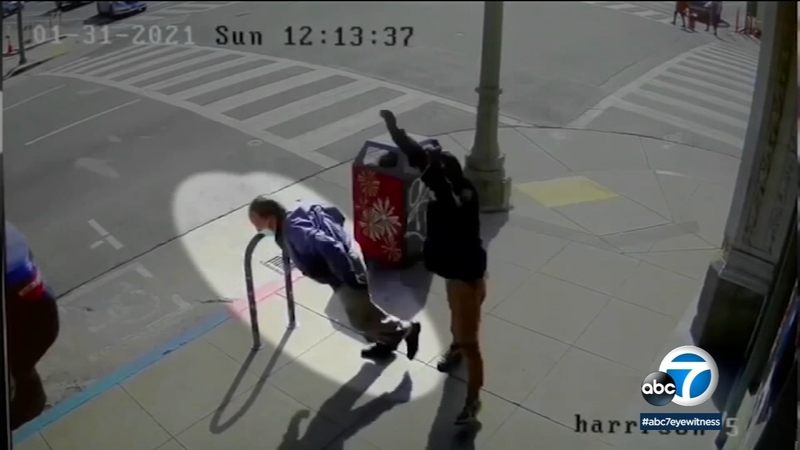 LOS ANGELES (KABC) -- Tracking a rise in hate crimes and discrimination against Asian Americans and Pacific Islanders since the start of the COVID-19 pandemic, the Los Angeles County Board of Supervisors approved allocating more money to fight the problem.

"Despite our efforts to combat hate, the situation has gotten worse,'' Solis said. "We must expand the county's only anti-hate program to show that L.A. County stands with our marginalized communities when they are under attack."

Solis said according to a report from the Los Angeles Police Department, anti-Asian crimes in the city jumped 114% in 2020.

"Amongst other things, let's lay the blame where it belongs. This deteriorating situation is partly due to the fact that the person with the loudest bullhorn in the country mocked and denigrated our API communities for the better part of a year," she said.

Orange County community leaders are taking a stand against the recent rise in anti-Asian American hate crimes. Advocates say the county has seen a tenfold increase in reported hate crimes since the start of the pandemic.

The LA vs Hate program helps victims report both hate crimes and non-criminal hate incidents and get help with counseling, medical costs and other support.

Solis estimated that the program's rapid response network needs another $831,000 annually to more effectively serve the county through a series of community partners.

Hate incidents have particularly targeted seniors, Solis said, with more than 800 attacks ranging from verbal insults to physical violence reported via the county's 211 information line over the last year.

"In my district, a Chinese man was attacked at a bus stop in Rosemead and a temple in Little Tokyo was vandalized in the past several weeks,'' she said. "And we know that this is just the tip of the iceberg. The vast majority of hate incidents have gone unreported.''

Matthew Leung, an elementary school teacher's aide who was beaten with his own cane at a bus stop on Feb. 7, lost the tip of his finger as a result of the attack. However, detectives told the Los Angeles Times that they believed the assault was random rather than race-related or a hate crime.

The county has been tracking hate crimes for more than 40 years and has seen an increase every year for the last six years, according to Los Angeles County Commission on Human Relations Executive Director Robin Toma.

"Our last full year report hit our highest level in 10 years,'' Toma said. "There were large increases in 2019 in white supremacist hate crime. We saw the second highest number we've ever seen of hate crimes with anti-immigrant slurs ... and anti-Asian crime grew precipitously, as well.''

The city of Los Angeles has seen a more recent doubling in hate crimes against Asian residents, a trend seen in many large American cities across the country, according to Toma.

An Uber driver shared disturbing video with our sister station KGO-TV of passengers he says attacked him after one refused to put on a mask.

The driver, Subhakar Khabka, says he was picking up the women in the Bayview area of San Francisco Monday afternoon when he noticed one did not have a mask. He asked her to put one on and that's when they allegedly started coughing and yelling racial slurs.

"It was unbearable. I was scared of my life," says Khabka who is is from Nepal and has been driving for Uber for three years.

Disturbing video captured the moment California Uber driver Subhakar Khadk was attacked, harassed after asking one of his passengers to wear a mask.

In the videos, Khadka pulls into a gas station so that one of the women can buy a mask, but as she gets out of the car the driver can be heard saying that he was canceling the ride. He then asks the woman to get out of the car because he was going home.

"She started taunting me, cursing me, questioning me about being a man. The ladies were even talking about shooting me, calling their cousins to shoot me. They were making fun of my race," said Khadka.

The women say they won't get out of the car until their other Uber arrives, but the driver persists in asking them to "please leave the car."

After asking a final time, he starts driving away with the women still in his car. In the videos, the women can be heard laughing at him and asking him if he's kidnapping them. At a stoplight, he can be heard asking them a final time for them to get out or that he will have to drop them off on the freeway.

According to police, the suspects exited the car and the third passenger reached into an open window and sprayed what is believed to be pepper spray into the vehicle and toward the driver. The suspects then left the car.

In a statement, an Uber spokesperson said: "The behavior seen in the video is appalling. rider no longer has access to Uber."

Meanwhile, community leaders and victims urged Angelenos of all races and nationalities to stand together against hate.

"It is our collective responsibility, it is our collective fight to root out hate and hatred in our communities,'' county Supervisor Holly Mitchell said. "Hate is real, it is dangerous, and just like COVID, hate can spread rapidly if not addressed head-on.''

One victim shared stories of a family in her West Covina neighborhood who repeatedly harassed her and allowed their dog to attack her.

"As an Asian woman, I am afraid now,'' Shelly Shen said, adding that she and her other neighbors have installed security cameras to protect themselves.

Shen said she was frustrated by the lack of support for her complaints prior to finding LA vs Hate.

Another victim expressed frustration with law enforcement officers who told her they couldn't arrest a stranger who told her to "go back to Asia'' and called her derogatory names when she declined to have lunch with him.

Some departments have since provided additional training, she said, including teaching officers that they can write incident reports even if a crime has not been committed.

LACCHR Commissioner Fredrick Sykes, a former sheriff's deputy, said that while officers who didn't witness a crime may be unable to make an arrest, victims should know they can initiate a private person's arrest that will generate a citation.

"Any act of hate against any one of us is an act of hate against all of us,'' Gascon said. "We want to send an unequivocal message that there is no tolerance for hate in our community. That whether you target our brothers and sisters of the API community, LGBTQ community or the Black or the brown community or any other community, we will stand together to make sure that those who are fear mongering, those who are expressing hate will be held accountable.''

Toma urged residents to display the LA vs Hate's poster on social media or in their window at home as one way to show that they stand against hate and also encouraged victims to report incidents.

More information about LA vs Hate is available at lavshate.org.