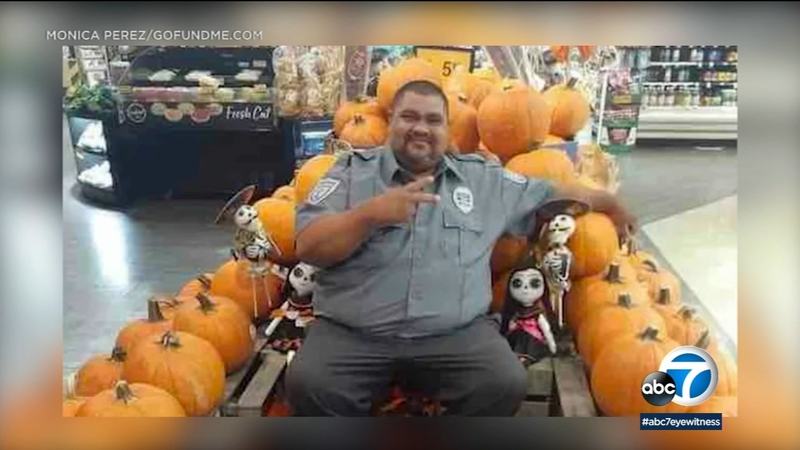 HAWTHORNE, Calif. (KABC) -- New surveillance video has emerged that shows a 40-year-old man driving a pickup truck onto a sidewalk in Hawthorne, nearly hitting a group of pedestrians before he was pulled from the vehicle and beaten to death.

The footage is now part of a police investigation.

From across the street, security cameras captured Melguin Santos' truck as it crossed three lanes of traffic before driving up onto the sidewalk in the early morning hours of Oct. 9.

The incident occurred near the bar on Hawthorne Boulevard that Santos had been kicked out of shortly beforehand.

Police say he got into an argument with a group of people and then tried to run them over.
EMBED More News Videos

A candlelight vigil is planned in honor of the man who was beaten to death after he allegedly tried to run over people with his car outside a bar in Hawthorne. Meanwhile, his family members are speaking out.

Santos first hit a tree and then crashed into a nearby liquor store, but missed the pedestrians, authorities say. That's when police say four men pulled him out of the truck and beat him.

"Why couldn't they talk it out? Why hurt him like that?" said his sister-in-law Ilene Perez.

A group of activists and family members called on city officials to introduce a reward for the arrests of the people who allegedly killed Santos, a father of four.

Perez disputes the claim that her brother-in-law was trying to run the group over.

"You got it all wrong. My brother wasn't like that. He was not a killer. They killed him. He was probably trying to get away. He probably feared for his life," she said.

"My brother-in-law was a good man. He didn't deserve this. Whatever...started it, whatever took it to that situation, it shouldn't have (gone) that far," Perez said.

Both the liquor store and sports lounge provided surveillance video of the incident to investigators.

"The staff of The Rock It Sports Lounge would like to offer our deepest condolences to the family," the bar said in a statement. "We are saddened by the tragic loss of life that occurred early Saturday morning outside on the sidewalk. There is an investigation and we are complying with authorities."