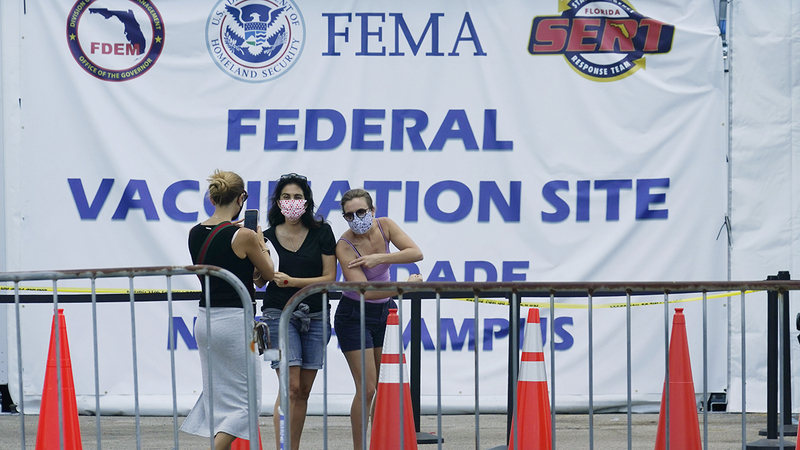 MIAMI -- Variant COVID-19 infections skyrocketed following spring break in Florida and there have been more than 10,000 variant cases reported throughout the state, the South Florida Sun Sentinel reported based on data from the Florida Department of Health.

A total of 753 variant cases from three strains -- the B.1.1.7, the P.1, and the B. 1.3.5.1. -- were reported on March 14, according to variant infection data shared with ABC News. The Florida Department of Health does not disclose variant cases on its public dashboard.

That number swelled to 5,177 cases from five types of variants on April 15. Just two weeks later, the number of variant infections exploded to 9,248 on April 27, according to local ABC affiliate, WFTV.

The surge falls in line with mid-March into April spring break celebrations, when college students and vacationers flock to the sunshine state.

Florida is home to the most variant COVID-19 cases in the country. State health officials reported more than 11,800 cases of COVID-19 variants on Wednesday, according to the Sun Sentinel.

In total, variants have led to the hospitalization of 243 residents and the death of 67 people in Florida, the Sun Sentinel reported.

Pfizer has initiated its application for full FDA approval of its COVID-19 vaccine as California is on track to reach herd immunity by June.

Only 1% of all COVID-19 cases in Florida undergo testing to study their genetic coding, meaning the number of variant infections is likely much higher than reported.

The data regarding variants was first released Monday hours after Gov. Ron DeSantis announced the lift of all local COVID-19 restrictions.

The Florida Department of Health released the data as a part of a legal settlement with the Orlando Sentinel after the paper sued in March to obtain a county breakdown of variant cases. A judge ended up agreeing with the paper's claim that the data was vital "to understand how the virus continues to spread and affect Floridians."

As vaccinations across the country slow, there are concerns over the threat of highly transmissible variants. In Florida, the B.1.1.7. variant, which first emerged in the United Kingdom in December, makes up the highest number of variant cases. There are also several reports of the South African and Brazilian variants.

As of May 1, Miami-Dade County led the state with 2,279 variant cases, followed by Broward County with 1,950 variant cases, the Sun Sentinel reported.

While variants seem to be gaining traction, overall COVID-19 cases in the Sunshine State are slowing. Health officials reported a 4.67% COVID-19 positivity rate on Friday -- the second day in a row that it has dipped below 5%, per state data.

Now doctors are warning the public to stay vigilant and get vaccinated to prevent cases from going back up.

Dr. Bernard Ashby, a Miami-based cardiologist who has worked in the front lines of the pandemic, is warning of the dangers of the variants, especially in populous areas.

"If you look at the county breakdown, Miami-Dade leads the state in the variants followed by Broward County. And we've led in infections rates in general," Ashby told ABC News. "What's interesting is the degree to much the counties dominated ... [those counties] essentially account for almost 40% of the variants in the state that's out there."