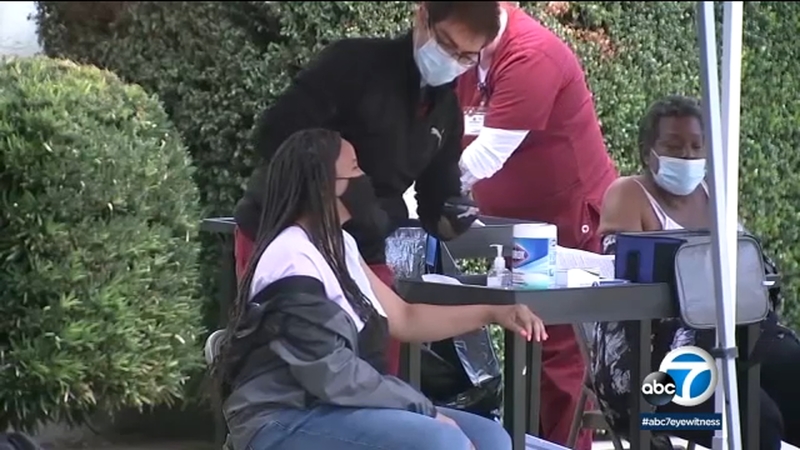 The projection comes as vaccination expands to a younger age group and is being made available without an appointment.

The Pfizer vaccine is now the first to be approved in the United States under emergency use for children ages 12-15, adding millions of people to the ranks of the eligible.

The vaccine had previously been approved for 16 and over.

The move makes another 5% of the U.S. population - 17 million people - now eligible for the shot.

California could reach herd immunity by June 15, according to projections by doctors at UCSF.

In Los Angeles County, health officials say there are about half a million eligible kids in that age range.

More than 8 million doses of vaccine have been administered across Los Angeles County, with over 5 million of those representing first doses. There are still some 3 million eligible residents who have not been vaccinated - and reaching them will be the key to achieving herd immunity.
The concept of community or herd immunity -- at which enough people are vaccinated to significantly slow spread of the virus -- remains an indefinite target. County health director Dr. Barbara Ferrer noted again Monday that it's still unclear exactly what percentage of residents would need to be vaccinated for such group immunity to kick in, but she said the assumption continues to be about 80%.

"We're currently getting about 400,000 vaccinations into the arms of L.A. County residents each week, and we have probably over 2 million more first doses to go until 80% of all L.A. County (residents) aged 16 and older will have received at least one vaccine,'' Ferrer said.


"At the rate we're going, we expect that we can reach this level somewhere in mid-to-late July," Ferrer said. "That assumes that we continue to at least have 400,000 people vaccinated each week."

It's unclear if the projected herd immunity of July will affect Gov. Gavin Newsom's plan to fully reopen the state's economy by June 15. It's also unclear what a full reopening means. Newsom has said the reopening is contingent on having enough vaccine supply for Californians 16 and older and if hospitalization rates remain low and stable.

L.A. County is working closely with family physicians to begin administering shots to kids. Other strategies include providing vaccination at school sites.

The approval comes as L.A. city is making it even easier to get vaccinated - eliminating the need for any appointment at all city-run sites and offering evening hours at several locations.