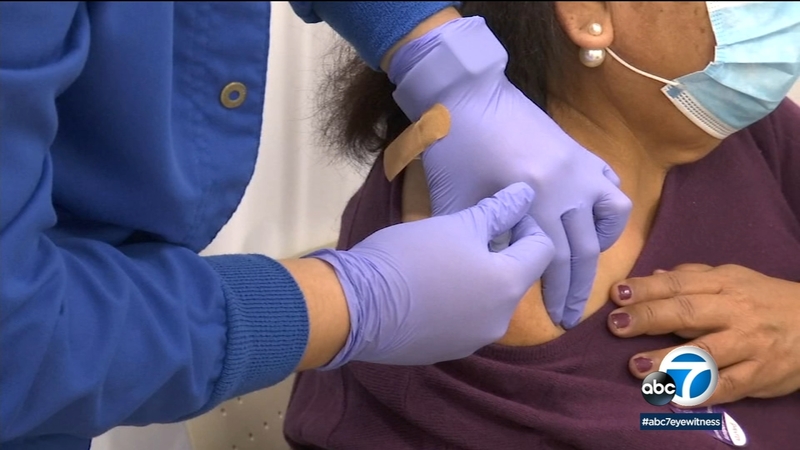 On Friday, Santa Ana and Anaheim seniors shared their stories with Eyewitness News of loved one after loved one lost to COVID-19.

Lidia Rizo said in Spanish that she was nervous about getting her shot Friday morning at AltaMed in Anaheim, but she was motivated after losing her brother-in-law and three friends.

Rebeca Hernandez was at a vaccination site at Valley High School Friday. Her husband was recovering after being hospitalized. Hernandez's eyes teared up as she said in Spanish, "My brother, God took him because of this."

Benjamin Hernandez admitted he was reluctant to get vaccinated at first, but Friday, he was in line at AltaMed. Hernandez said he attended funerals for three friends in January alone.

"We have to go to one funeral after another funeral," Benjamin Hernandez said.

These Latino seniors in Orange County all said they were motivated to get their own shot after the death they've seen.

They're at greatest risk of dying from the virus, according to the county's Health Care Agency Director Dr. Clayton Chau.

"We know that our seniors who live in the lowest SES areas, mainly the zip codes in Santa Ana, Anaheim and Garden Grove, have a higher percentage of dying from COVID if they get it," Dr. Chau said to the county Board of Supervisors Tuesday morning, adding, "and those areas just happen to have a larger Latino population."

OCHCA data shows vaccination rates for Latino seniors are dangerously low. Latinos over the age of 65 make up 15% of O.C.'s population, but according to numbers presented by Chau, 10% of those have been vaccinated, compared to 60% for seniors identifying as white, which make up 60% of the population.

Health care leaders said the barriers in these communities include lack of access to the vaccine or the internet, language and fear.

AltaMed doctors resorted to phone banking Thursday night to fill appointments for nearly 2,000 shots they secured for their Anaheim location. Their goal was to at least book 50% of those for the weekend.

One of those making calls was Dr. Iland Shapiro, the director of Health Education and Wellness at AltaMed. Shapiro said, unfortunately, the call came too late for some members.

In partnership with AltaMed and other trusted community partners like the Santa Ana Unified School District and Latino Health Access, the county hopes to bridge gaps and put more shots into the arms of those at greatest risk.

On Friday, Sunday and Monday, 500 shots would be administered at the Valley High site to Santa Ana seniors 65 years of age and over, according to SAUSD Public Information Officer Fermin Leal. District staff and students promoted the event to seniors in their families and communities to book appointments. Half the shots were geared toward seniors affiliated with SAUSD, the other half to others over the age of 65 in the community.

"It's been a great response because the trusted voice is there, because it's people who they know and because it's a school district on top of it all. It has been instead of us getting the hesitancy, we're getting the calls asking if they can come," Lopez-Guerra said.

Chau said Tuesday that vaccination efforts will focus on seniors 65 and over in hotspots like these over the next two weeks, after which he'll examine whether O.C. will move onto Tier 1B, which would open vaccinations to people in food and agriculture and education and childcare.
Report a correction or typo
Related topics:
health & fitnesssanta anaanaheimorange countycoronaviruscovid 19 vaccinecoronavirus orange countycovid 19 pandemic
Copyright © 2021 KABC-TV. All Rights Reserved.
COVID-19 VACCINE