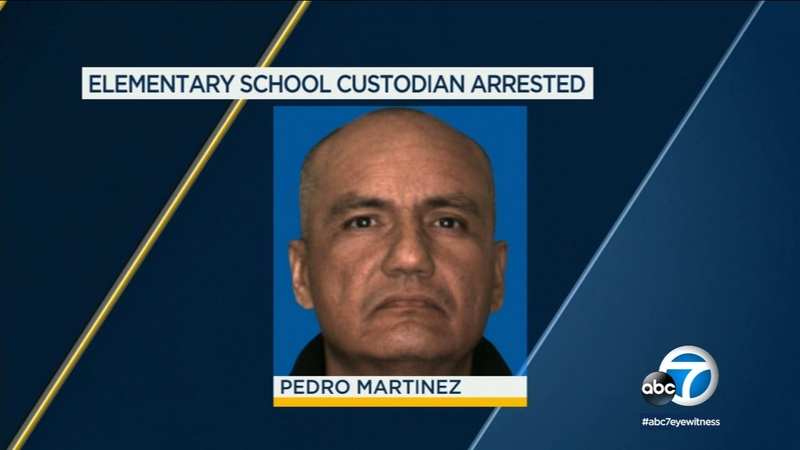 HESPERIA, Calif. (KABC) -- A custodian at an elementary school in Hesperia has been arrested for sexual abuse of a young boy at the school and his family is preparing a lawsuit against the school district.

Officials and an attorney for the boy's family says there could be at least four alleged victims and perhaps many more as the custodian had worked at the school for 14 years.

Earlier this week Pedro Martinez, 45, was arrested and charged with lewd acts on a child, sodomy, oral copulation and kidnapping.

Martinez, a longtime janitor at Maple Elementary in Hesperia whom the children called "Mr. Pete," is accused of taking boys into a classroom during the school's lunch period, sometimes one at a time, sometimes in a group, where the abuse took place.

It had apparently been happening for months. In addition to the sexual abuse, Martinez is accused of physically abusing the children as well, covering any bruises they would suffer by forcing the kids to hit each other, so they wouldn't be lying when they told adults who had hit them.

The abuse would likely still be going on were it not for one child, whose family had noticed a change in his behavior. They were in Rowland Heights at a friend's house this weekend when it all came pouring out.

"From Friday evening to Saturday at 2 in the morning, it was a seven-hour span where he just let everything that was hurting him out," said Magdalena Serna, a friend of the boy's family. "It was very horrific, very detailed. During a lot of the conversation you could see the fear in his eyes when he spoke about Mr. Pete."

The family's attorney says the school district is to blame for somehow allowing the abuse to happen on school grounds for an extended period of time.

"There's no way they should go missing during the lunch hour and be at the hands of a predator."

Martinez is now being held on $1 million bail. The boy's family will be filing a lawsuit against the Hesperia Unified School District.

District officials say they are cooperating with the investigation and they do conduct extensive background checks on any potential employee, and that there was nothing in Martinez's background that would suggest such conduct.

"This news is deeply concerning and we are cooperating fully with law enforcement as this matter is investigated," district Superintendent David Olney said.