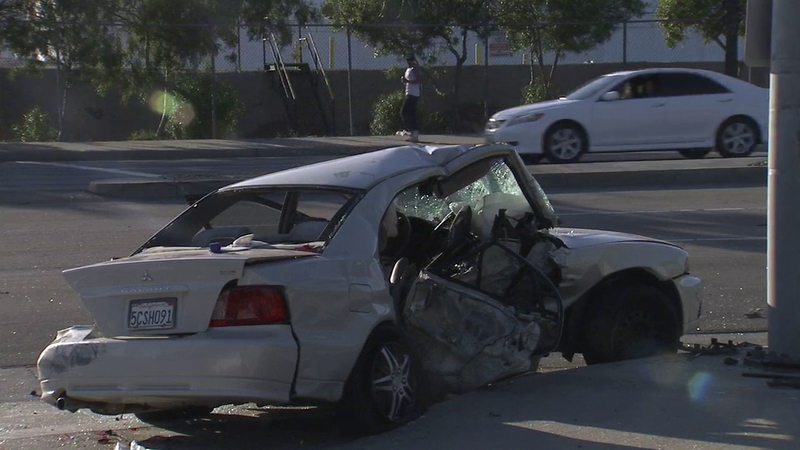 The Los Angeles County coroner identified Angie Ruiz, 15, and Lester Larios, 55, both of Bell, as the two people in a white Mitsubishi that was mangled in the crash.

Around 4:27 p.m. Saturday, authorities responded to a two-car collision involving one of the cars hitting a pole at El Paseo Street and South Garfield Avenue near a Starbucks parking lot.

Authorities said Bryan Rojas, 22, fled from his car moments after crashing into the Mitsubishi.

The car was smashed so badly that five people ended up trapped inside and firefighters had to use the Jaws of Life.

Ruiz and Larios were pulled from the car and pronounced dead at the scene. The other three people were seriously injured and transported to a local hospital. A passenger in the suspect's car was also injured in an unknown condition.

Police said speed was a factor in the crash.

"Driving drunk, or driving under the influence of say NOS or marijuana, or being involved in street racing, it can lead to something like this that you're going to change and impact some family's life and obviously impact your own life," Sgt. Chris Dahlia with the South Gate Police Department said.