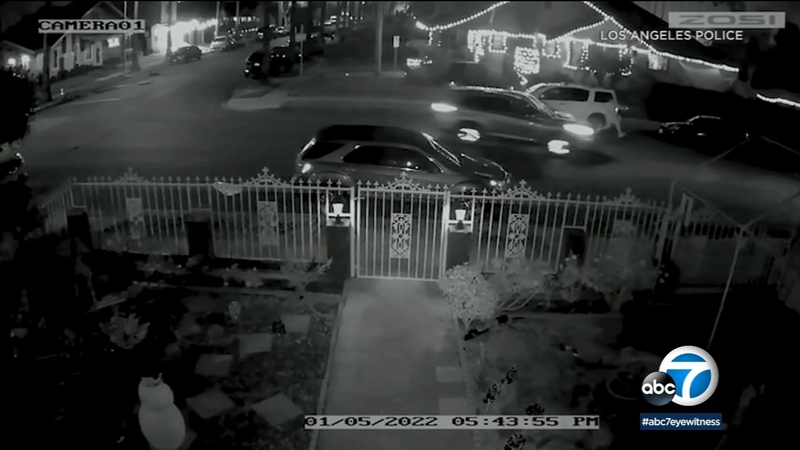 SOUTH LOS ANGELES (CNS) -- Authorities on Thursday were asking for the public's help, hoping that rewards would aid in solving three recent hit-and-run cases -- one involving a fatality -- in the Jefferson Park area of Los Angeles.

On Jan. 5, 46-year-old Nallely Oregel was walking her dog on Fourth Avenue at 30th Street when the driver of a silver mid-size SUV traveling at a high rate of speed ran off the roadway onto the sidewalk and struck her and her Dog.

On Jan. 7, 25-year-old Giovanny Castro was riding a scooter south on Western Avenue at 29th Street when he was struck from behind by a gray compact vehicle being driven at a high rate of speed.

And on Jan. 11, a man suffered "massive head trauma'' when he was struck by a maroon Chevrolet Trailblazer as he walked on Jefferson Boulevard near 11th Avenue, and he was hospitalized on life support.

On Thursday morning, authorities held a news conference and released security images in all three cases. At the news conference, it was announced that the man injured in the Jan. 11 hit-and-run, Luis Alberto Martinez, had died at the hospital.

California prosecutors have filed two counts of vehicular manslaughter against the driver of a Tesla on Autopilot who ran a red light, slammed into another car and killed two people in 2019.

"We (want) justice -- for my mother-in-law, for our family,'' Jasmen Otero, a relative of Martinez, said at the news conference.

"So, if you guys have any information, please call to help us out, to help my mother-in-law from this pain and everything, because it's too much for her,'' Otero said.