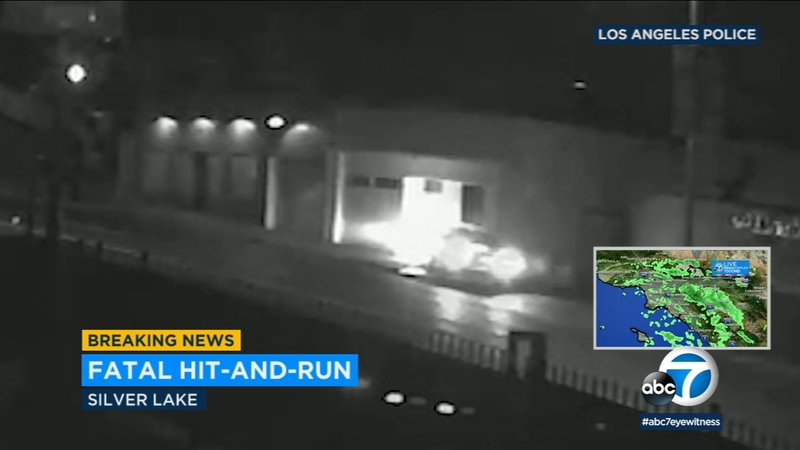 SILVER LAKE, LOS ANGELES (KABC) -- Police are looking for a driver who struck and killed a woman in Silver Lake then fled the scene early Wednesday morning.

Dramatic video shows the driver losing control on a rain-slicked Hyperion Avenue, spinning out and striking the side of a building.

He gets out and inspects the damage briefly, then drives off.

Police say it's not entirely clear if the driver saw the body of the woman he struck, as she was later discovered covered by trash and debris. She was believed to be a woman in her 50s or 60s who was out collecting recyclables.

The incident happened on Hyperion Avenue at De Longpre Avenue.

The woman's body was discovered on Hyperion near De Longpre Avenue around 7:30 a.m. by a transient who was also looking for recyclables.

Investigators checked surveillance video and discovered that a vehicle lost control, hit a street sign and some trash cans.

That's when the woman, who'd apparently been looking for recyclables, was also struck.

"The driver actually exited the vehicle," said Los Angeles Police Department Det. Juan Campos. "It appears he inspects the damage of his vehicle. However we're not aware if he actually saw that he struck somebody. Because when the victim was found she was covered by the trash cans and debris. The driver got back in his car and fled the scene."

The vehicle is described as a tan 2010-12 Toyota Corolla. It has front-end damage and the right side view mirror was knocked off in the collision and left at the scene.