In an Instagram post, TV star Sharon Osbourne said her daughter was inside the studio at the time of the fire with her producer.
KABC
By Josh Haskell and Marc Cota-Robles 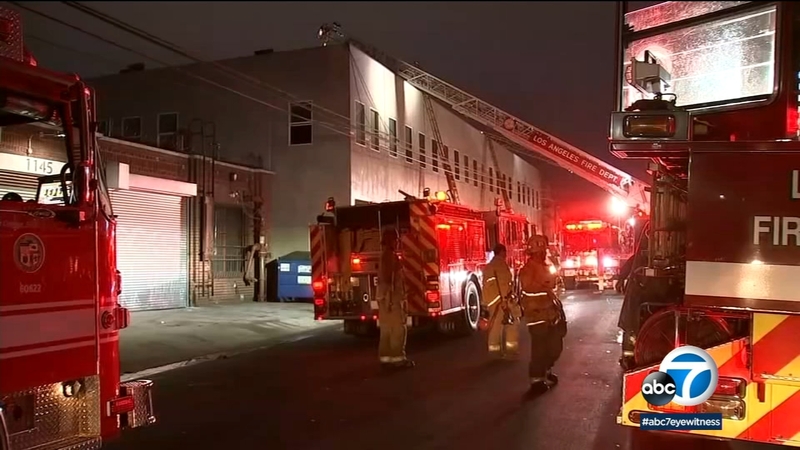 HOLLYWOOD, LOS ANGELES (KABC) -- A man was killed after a fire broke out at a recording studio in Hollywood Thursday evening.

Firefighters with the Los Angeles Fire Department were called just after 5:40 p.m. to the two-story building located at 6600 Lexington Ave.

The man was found dead after firefighters extinguished the blaze, according to authorities. Two people were evaluated for smoke inhalation, but did not wish to seek medical attention, authorities said.

In an Instagram post shared Thursday night, TV star Sharon Osbourne said her daughter, Aimee Osbourne, was inside the studio at the time with her producer.

"They are the lucky two that made it out alive," she wrote. "It is utterly heartbreaking that someone lost their life today in this fire & we are sending our prayers to this person & their family. What happened today was beyond horrific. I really hope moving forward that buildings like this are better regulated for fire safety."

LAFD Capt. Erik Scott said the studio equipment made the fire difficult to put out.

"This was a very challenging fire," he said. "It was very compartmentalized inside because there were so many separate different recording studios. You had double dry wall, you had insulation, you had soundproofing that really held in the heat. It was an extremely hot fire. Zero visibility. So hot, that it burned through the floor on the first floor."

A recording hip-hop artist and rapper known as Maxxamillion told ABC7 he lost his entire recording studio and $50,000 worth of equipment.

"I opened the door, I saw smoke coming from across the hall, I immediately reached over to grab a jug of water," he said. "I threw it at the door, flames bursted. I tried to go back to my room and grab anything I could, but flames were everywhere and we ran out the building and that was it."

It's unclear what sparked the fire. The cause remains under investigation.

Music producer Justin Barnett said he lost almost everything in his studio that he had only recently began renting.

Barnett said he has been in the music business for about 15 years.