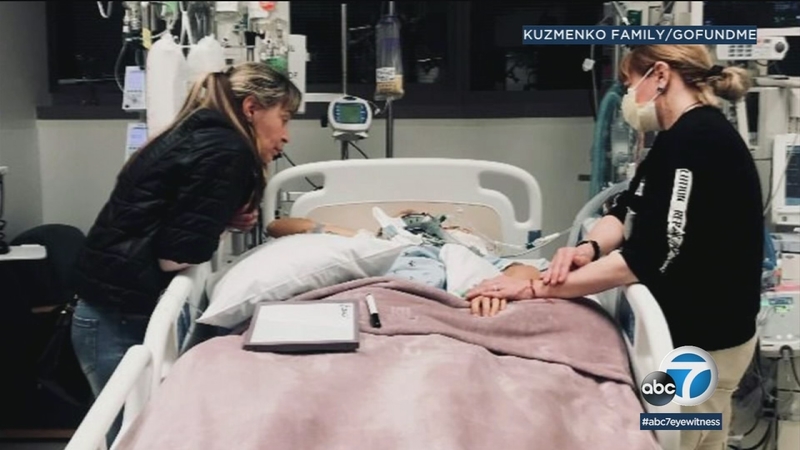 HOLLYWOOD, LOS ANGELES (KABC) -- A young Ukrainian model visiting Southern California got an Uber ride to check out the sights and sounds of the city, and now she may never walk again.

Liz Kuzmenko is in a UCLA Medical Center bed and wants to know when she can go back to work.

The reality is that she'll most likely be in the ICU for another four weeks. It's a far cry from where the aspiring model was just one month ago.

Iryna Kuzmenko has only been in the U.S. for two weeks, and now her daughter has undergone four massive surgeries.

"For someone who is so active, so loving life to be in that position is like being in prison with yourself," she said.

On New Year's Eve, she went out with three friends: Inga, Natasha and Eugene Efuni.

Jumping into an Uber around 6 a.m. on New Year's Day seemed responsible, but a drunk driver, speeding south on Vista Street blew through a stop sign and T-boned the Prius driven by their Uber driver on Melrose Avenue.

Six people were injured, three critically, after a suspected DUI driver blew a stop sign, causing a car crash with an Uber that sent one vehicle into the side of a building in Hollywood.

On the morning of the crash, ABC7 spoke to one of several good Samaritans who tore after the suspected DUI driver when he tried to run away.

"We just saw him split down the alleyway like a coward," said good Samaritan Dovi Levin.

It's been a month since the crash and those good Samaritans stepped in to help. That goodwill continues to grow, and now extends to even more Angelinos.

Spencer Wolf's wife is from the same Ukrainian town Liz Kuzmenko grew up in. They're helping in any way they can by translating and connecting overseas family with local information about the young model.

"I think they just need sustained support because nobody knows how long this tragedy is going to go on for, and Liz's story is just beginning," Wolf said.

Natasha's friend, Dennis Vichikov was the first person to set up one of three GoFundMe pages.

"She had brain damage, and the tube in her lungs and chest. The doctors said at least a couple months before she can travel," Vichikov explained.

Victim Eugene Efuni, a TV and film producer, was taking care of his grandparents -- a job his nephew, Sergey Efuni, has taken over temporarily.

"It is frustrating but it's nothing compared to what he's going through, so it's one of those things where I think it just gives you an appreciation for one and friends that he has and that we have," Sergey Efuni said.

The expensive road to recovery is taken day by day, an effort which has connected a unique global community with a center right here in Los Angeles.

"If we put it out into the universe, perhaps it'll come back to somebody else in their time of need, as corny as that sounds," Wolf added.

Liz Kuzmenko cannot move from her shoulders down and communication is very limited. Eugene Efuni just emerged from his coma, and a lawsuit on his behalf has been filed against the Uber driver and the 37-year-old drunk driver who slammed into them.

Three GoFundMe accounts have been set up to help the victims: