Another night of Breonna Taylor demonstrations were held Friday as police investigated a pickup truck that struck a protester in Hollywood the previous night.
KABC 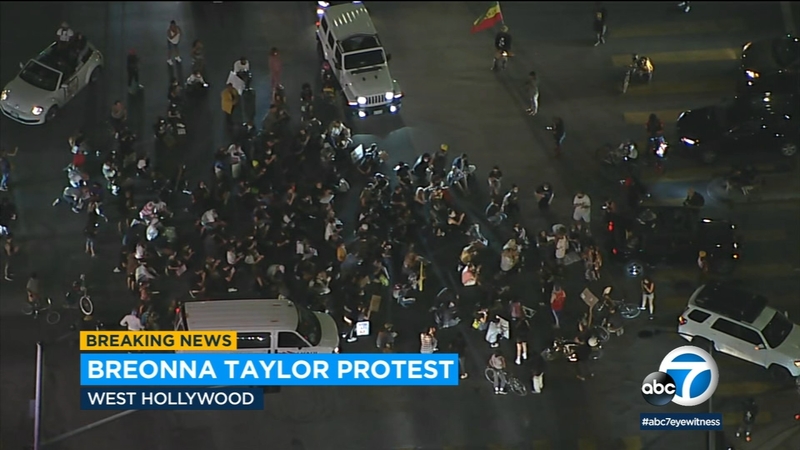 HOLLYWOOD, LOS ANGELES (KABC) -- Another night of Breonna Taylor demonstrations were held Friday as police investigated a pickup truck that struck a protester in Hollywood the previous night.

Demonstrators gathered at 7 p.m. at William S. Hart Park near Sunset Boulevard in West Hollywood. About 50 marchers were spotted going northbound on La Cienega Boulevard to join the rally shortly after 8 p.m.

In anticipation of the protest, the intersections of Sunset Boulevard and Doheny Drive and Sunset and Havenhurst Drive were ordered closed from 5 p.m. Friday through Saturday morning by the Sheriff's West Hollywood Station, according to the station's watch commander.

The pickup left the scene but was stopped, its driver temporarily detained by police, then released.

"Hollywood officers stopped that driver several blocks away, where he cooperated with officers and provided information. His vehicle had evidence of damage from the confrontation with protesters,'' police said Friday.

"He was released pending the outcome of a hit-and-run investigation.''

Officers believe the driver was attempting to maneuver through the crowd but was surrounded by protesters.

"The protesters began beating his vehicle with sticks and tried to open the door to his vehicle,'' police said. "As he attempted to drive away from the situation, he struck a protester who was in the street.''

About 40 minutes later, the driver of a white Prius tried to get around the protest as it moved down Sunset Boulevard, near Vine Street, and became surrounded by protesters, some of whom allegedly struck and damaged the car.

The driver of a black pickup police believe was involved in the protest followed the Prius for about a block and "forced the Prius to come to a stop,'' police said. The Prius reversed and hit a green Ford Mustang.

Police allege the occupants of the Mustang and the pickup began striking the Prius, and tried to "extract the driver of the Prius from his vehicle'' before he drove off. No injuries were reported.

Officers later pulled the Prius driver over and he cooperated with their investigation.

A protest in Hollywood took a violent turn when demonstrators appeared to have tried to pull a driver out of a vehicle.

The Thursday evening protests began around 7:30 p.m., with at least 200 people sitting and standing in the grass outside the entrance to the Hollywood Forever Cemetery in Hollywood.

The group stopped in an intersection for a rally and sit in before continuing to march. The mostly peaceful demonstration wound its way up to Sunset.

Motorists drove by the protest honking in support, and a series of speakers addressed the crowd.

Sheriff's deputies eventually moved in on the crowd. At least 10 people were detained. It is not yet clear if any arrests were made.

Taylor, a 26-year-old emergency medical worker, was fatally shot in her apartment early on March 13 by officers executing a search warrant, according to Kentucky Attorney General Daniel Cameron.

A no-knock warrant had issued in the case. It was connected to a suspect who did not live there and no drugs were found inside.

Taylor's family later received a $12 million settlement payment from the city of Louisville.

A Jefferson County grand jury on Wednesday decided that no officers will face charges for Taylor's death.

"Breonna Taylor was sleeping when police raided her apartment and killed her. She deserves justice. Breonna -- and all Black Americans -- deserve a system of policing that prioritizes justice and dignity over fear and bigotry, so a tragedy like this never happens again,'' Rep. Adam Schiff, D-Burbank, tweeted Thursday.

Black Lives Matter founder and Executive Director Patrisse Cullors, who is based in Los Angeles, said she was completely mortified that our criminal justice system has failed Breonna Taylor, her family and friends, and frankly, it has failed our country.''

"We are going to continue the work that we have started in the name of Breonna Taylor and countless Black lives cut short at the hands of police brutality, systemic racism, and white supremacy,'' Cullors said.