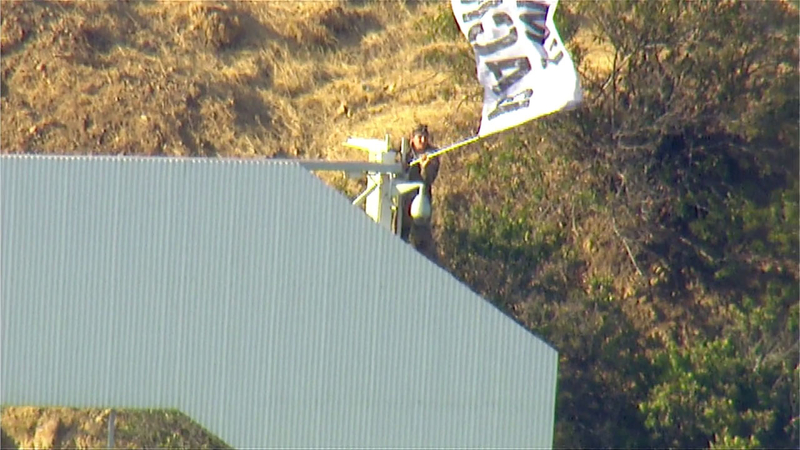 Park rangers took Zdorovetskiy, who was considered to be trespassing, into custody. A second man who was also seen climbing up the hillside was taken into custody as well.

After first climbing the 45-foot tall sign, Zdorovetskiy lost grip on his banner, climbed down to retrieve it and then climbed back up again briefly. He then returned to the ground and walked down the hillside, where he was met by officers.

A man is taken into custody after climbing the Hollywood sign, which is closed to the public, on Wednesday, May 25, 2016.

Zdorovetskiy, dressed in camouflage, was seen talking on a cellphone and wearing what appeared to be a small camera on his head.

It appeared he tried to hide the camera in some bushes as he climbed down the hillside, but officers later retrieved it.

Zdorovetskiy, of Russia, starred with other YouTube sensations in the DVD and video-on-demand release "Natural Born Pranksters."

At a World Cup game in Brazil, Zdorovetskiy ran across the field in his underwear. That stunt landed him in jail for an hour and he had to pay a $100 fine.

For his latest stunt, a misdemeanor trespassing fine could run $1,000 and Zdorovetskiy could face the possibility of six months in county jail.

Zdorovetskiy posted bail and was released from jail late Wednesday evening where he briefly spoke with ABC7.

"I did this because adrenaline man, you only live once and you have to explore things," Zdorovetskiy said. "I got high on life."